Rearranging Deck Chairs on the Titanic

Everyone wants to point fingers for this ongoing clusterfuck, including me. However, until the human race comes to terms with the fact that there are now 7 billion people on this planet and everyone wants the same "things" at the expense of everyone else, then all economic discussions ignoring that fact are merely pointless parlour games...

Once Third World nations decided they wanted a seat at the big table, the Developed world was put on notice.

Money printing, gold standards, Keynesian "Cargo Cults" and all other economic policies are really just secondary distractions from the much bigger issue that will exist long after these above symptoms have been resolved. When the Chinese and other developing nations decided that they were willing to work harder than developed nations to obtain the consumption-oriented lifestyle, then economic advancement became a zero sum game. Developed nations consume roughly four times as much resources per capita as developing nations, so it all just boils down to third grade math.

Supply is Demand: Separating Supply From Demand Was Never Going to Work Long-term
These fiscal and capital flow deficits are merely side effects of imbalanced trade flow. China best illustrates Ponzi capitalism's abject failure: that country has now achieved and in many ways surpassed the capabilities of many developed nations. At this stage they make almost everything, and if they put their minds to it, they could make anything. Imagine a world in which the Chinese can make everything we make but MUCH cheaper, and corporations have free choice where to source from - that's the world we live in.

Therefore, apologists for the status quo have yet to explain why China's industrial ascension hasn't led to a large and growing Chinese middle class. And the answer of course is obvious:

1) The total size of their population is too large

China (stock market) with All Commodities (CRB)
It doesn't matter which line is which. Resource prices are highly sensitive to the second derivative in China's economy aka. "growth" 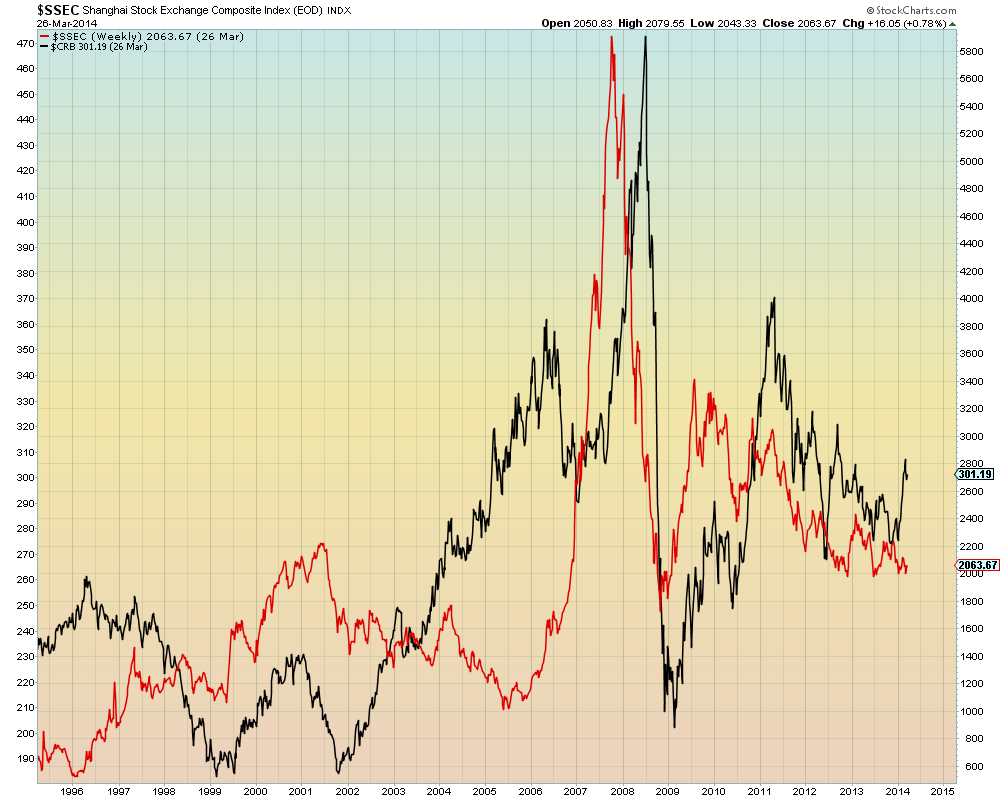 Again, this all highly intuitive and obvious, however, even at this extremely late juncture, having expended every device known to man to inflate this bogus global economy, STILL it's just widely ignored.

When the Ponzi borrowing ends, the trade imbalances will end; then the fiscal deficits will end for smaller sovereigns and eventually for the debt monetizers as well. At that point, the Developed world will experience the exact same resource constraints that the rest of the world has been experiencing throughout this entire era. The playing field will be leveled for the first time in decades. The consumption-oriented lifestyle will be a buried artifact of a corrupt and bygone era. Multinational profits will melt like a snowball in the sun, a casualty of collapsed revenues and self-destructing  "leveraged recapitalizations". At that point, the terms deflation, output gap, and outsourcing will be in extreme disfavour among the stoned masses, but as usual it will be a day late and many dollars short.

In the meantime, with the economic keel already at 90 degrees, the rearranging of the deck chairs continues.