The Fall of Rome Redux: We Live In a Fed-Printed Potemkin Village

Without the Fed, there would be no billunaires
I just read this Op-Ed written by a billionaire and a reformed Fed member, blasting the Fed for creating "balance sheet" wealth instead of real economic wealth. As usual, only half of the facts were told in an attempt to blame the Fed solely for the past 30+ years of economic carnage. The truth in all of this is that it was corporate errand boys at the behest of billionaires who annihilated the economy and otherwise arbitraged Third World labour in place of developed world labour, something literally no one in the lamestream wants to admit. The Fed's role in all of this was merely to print a fake economy to replace the real one that had been outsourced. We live in the Fed's Potemkin Village because the real economy no longer exists and under the current globalized paradigm will never ever exist again. This is the story of our time. Everything else is an historical footnote: 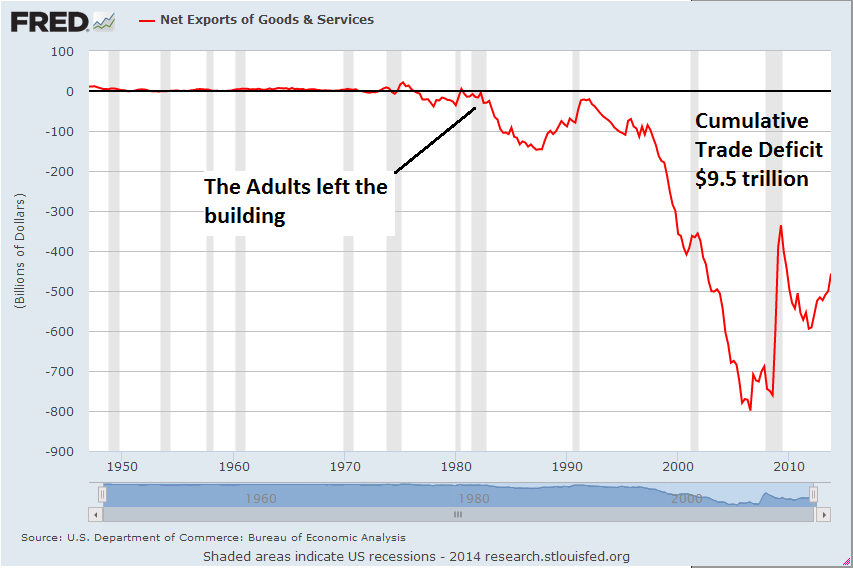 A Brief History of Deflation Via The Fed Funds Rate:

1990-1995
The Fed eased due to the S&L crisis and then started tightening in 1995 when Greenspan called the nascent stock market rally "irrational exuberance". Why he decried the valuation of stocks at the very beginning of a massive five year rally and then never spoke about it again, is just another ludicrous aspect of this equation.

1995-2000
The Fed held rates steady and then eased in 1997/1998 in response to the Asian financial crisis and then the LTCM meltdown/Russian default in 1998. They kept rates "low" going into Y2K but by then everyone knew a massive DotCom bubble had formed. They began tightening in the spring of 2000 and continued tightening right up until the recession. After 9/11 they dropped rates down to 1%.

2000-2007
Post 9/11, 1% "Patriot loans" continued until 2004 by which time many people had taken out Adjustable Rate Mortgages (ARMs). The Fed then raised interest rates 17 times in a row decimating anyone who had taken out an ARM loan. Millions lost their homes and were bankrupted.

2007-2009
By mid-2007 pretty much anyone who could fog a mirror, knew things were going way wrong. The housing bubble was collapsing and subprime was becoming a big "issue". Once Wall Street figured out how to short subprime (via CDS/CDOs), then the blood was in the water. Wall Street moved from one weak entity to the next dismembering their former competitors: Bear Stearns, Fannie, Freddy, AIG, WaMu, CountryWide, finally Lehman. The Fed was always one stop behind cleaning up the mess and recapitalizing the victims so that the predator firms could collect their gains. JP Morgan bought Bear Stearns for $2/share in 2008 when the stock had been trading at $160 a year earlier. Goldman's full year revenue for 2008, the year of the crisis, was $88 billion which is twice their current run rate. Of course, had the Fed and Treasury not bailed out the failed firms then Goldman et al. would have been crushed by their bets against the middle class.

Imported Third World wage deflation allowed the Fed funds rate to fall from 18% in 1980 to 0% now. 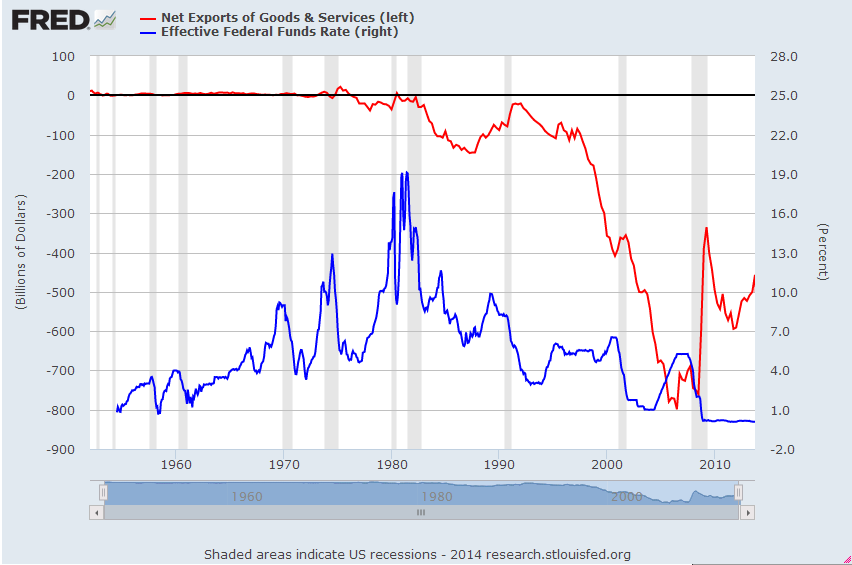 Billionaires and their errand-boys sold the real economy, so they had the Fed print a fake one. Today's MBA Frat boys don't know "Say's Law" that when you outsource supply, you outsource demand (aka. commonsense)

2009-Now
Notice in the chart above that interest rates were 8% back in 1990 and now they are stuck at 0%. The last time the Fed attempted to normalize monetary policy was in 2004 which obliterated their housing bubble. Since 2007, there has been no normalization whatsoever.

Now look at this chart below. Fed funds rate still at 0% AND $4 trillion in funny money to prop up the Dow and keep ETraders fat and happy. There is literally nothing real about this economic "recovery". It's all smoke and mirrors. Our "elites" are beyond desperate to maintain the status quo AT ALL COSTS:

We Live In the Fed's Potemkin Village
Zero % interest rates (blue line) and money printing (red line) create the illusion. If you can't have a real economy, you might as well print a fake one. This will continue until the paper house collapses: 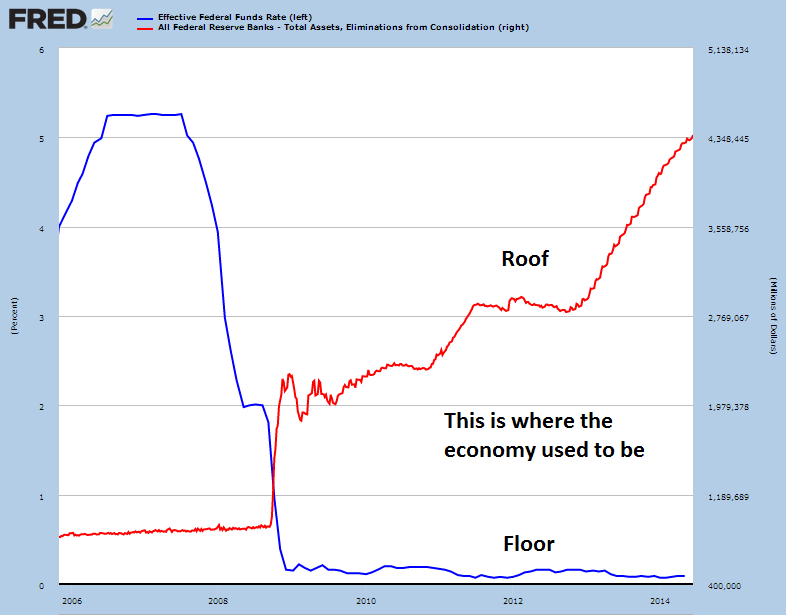 The decline of the New Rome is already well underway and only smoke and mirrors maintains the illusion for the masses.

We live in a society of old men and little boys, with one thing in common: denial.