We are kindly reminded here at the beginning of the New Year that investment risks faced today now EXCEED those seen at significant prior tops from the past century...

From Hussman Funds via ZeroHedge
The Log Periodic Bubble aka. U.S. stock market 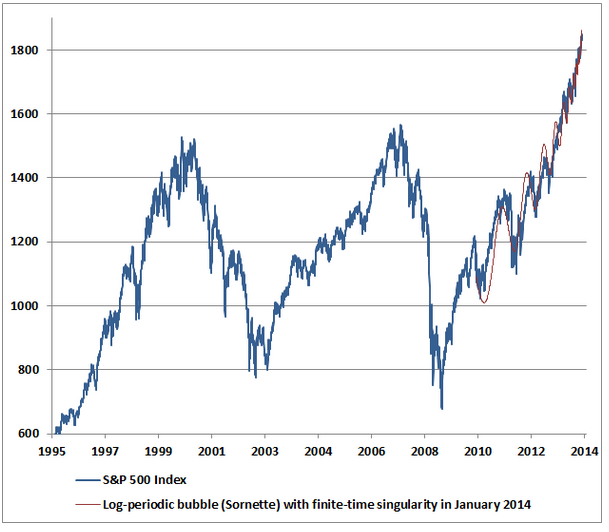 The Ultimate Test of Greed
The demonic purpose of the log periodic wave form is to convince as many people as possible to own risk while at the same time making anyone who doesn't own risk, feel like a complete idiot.

My synopsis of the Hussman Report (with my comments below each bullet):

1.) (Recent high) Consumer Sentiment is merely a contrary indicator
> Social Mood is being manipulated by the Fed and the stock market
> Consumer sentiment is still lower than it was in 2007 and 2000 i.e. this is a dead cat bounce

4) The above risk parameters have been flashing red for almost an entire year now, with no material weakness observed in risk markets in the interim
> See Greedometer from last Spring
> General sentiment is overwhelmingly complacent

5) Since 1871, there is only one period prior to the 1990s when stock market valuations were richer than today

6) Stock market bulls are reflexively pointing to stock market perma-bear prediction failure as proof of low risk
> The majority of perma-bears, especially those on Wall Street, have capitulated at this point. This is a one-way market like none other.

7) The nature of the log periodic bubble - accelerating slope and ever-attenuating corrections is playing out in price AND time. Finite singularity will likely be reached by mid-January latest.
> Per Daneric's Elliot Waves, we are literally running out of subwaves to count
> For this bull market, clearly TIME is playing a far greater role than even price. By discrediting the perma-bears like myself, bulls now feel that they have an aura of invincibility.

The Boy Who Cried Sell
I had no idea I was (indirectly) convincing so many people to buy stocks - I should have been a stock broker, apparently I missed my calling. Suffice to say, it's not the goal I had in mind when I started this blog, but the log periodic wave pattern had ideas of its own.

A Low Volume Fabrication
Regardless of the above cited indicators, NYSE trading volumes are at a fifteen year low and less than half what they were in 2008 despite the rise of High Frequency Trading (HFT), so this is all nothing more than a total fucking fabrication. To think that most of humanity is literally being manipulated along that attenuating curve shown above. Society's manic sense of consumer optimism and economic security, gamed by the vicissitudes of the Dow Jones Industrial Average and its proxies. The stability of society and the demand for Prozac in the hands of glitch-ridden HFT bots trading back and forth with each other on millisecond boundaries. Only a society as dumb as this one could fall for this Jedi Mind Trick. Unbelievable.

Update on BitCasino
Speaking of social mood, below is an update on BitCoin, trying to crawl its way back to former highs. It's carving out a picture perfect a-b-c correction with a 70% low volume retracement from the lows - back outside of its Bollinger Band (2 standard deviations: lower pane). I still say it's dead money and a very good general indicator of now-receding investor euphoria.
Data imported from: http://bitcoincharts.com/ 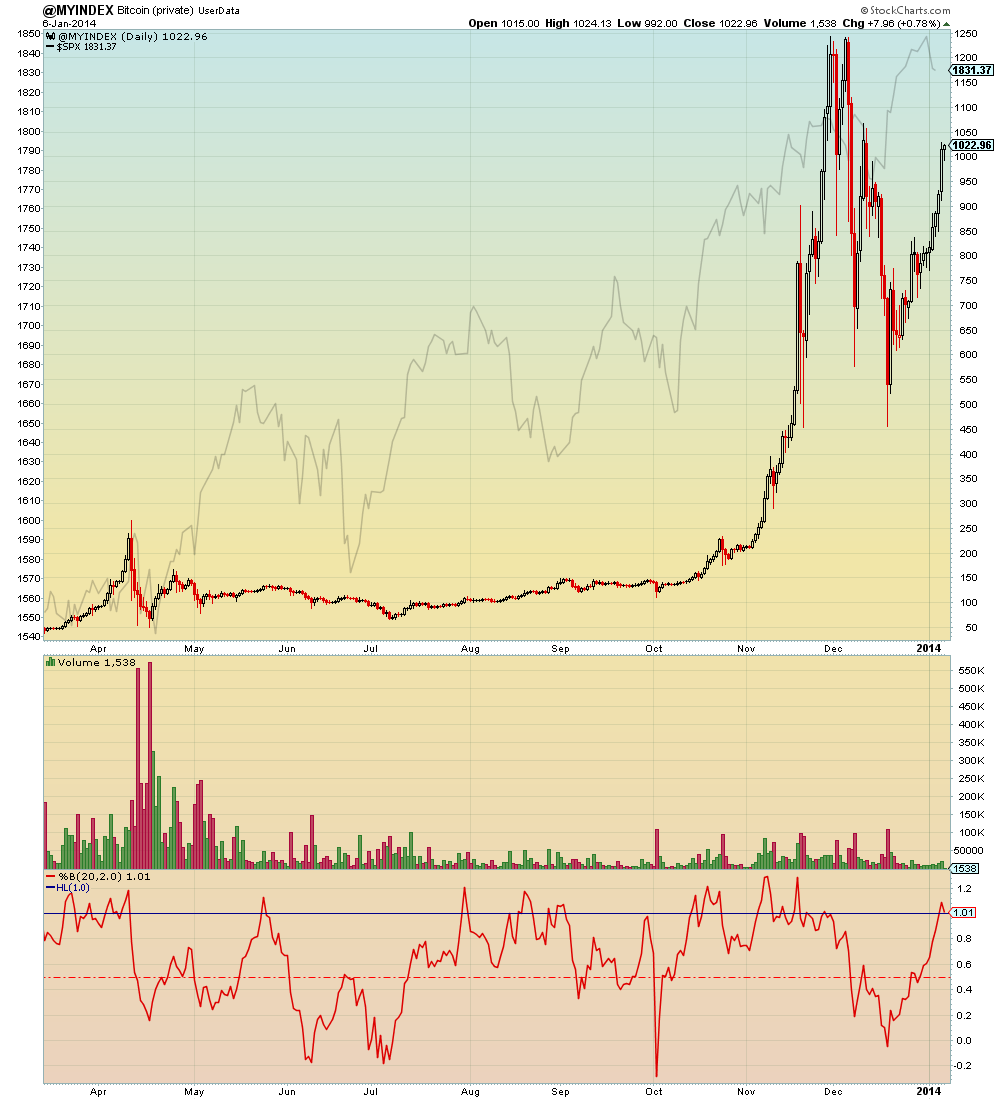