The stoned masses are being stewed to death in a lethal cauldron of monetary dopium, frankenfood and garbage culture. Monetary dopium has artificially dampened financial volatility giving investors a totally fake sense of comfort as economic fundamentals continue to deteriorate in the background. Frankenfood has thoroughly clogged minds and bodies, rendering judgement and energy levels down to zombie-like levels. For the majority, it's hard enough to focus on one's own day to day personal issues much less to focus on the macro-issue freight train bearing down in the distance. And what can I say about garbage culture that "My Teen is Pregnant and So Am I" presented on the The Learning Channel, doesn't say for itself...

Spain National Debt to GDP
Now at 93% up from 36% five years ago i.e. a 21% compound annual growth rate
http://www.tradingeconomics.com/spain/government-debt-to-gdp 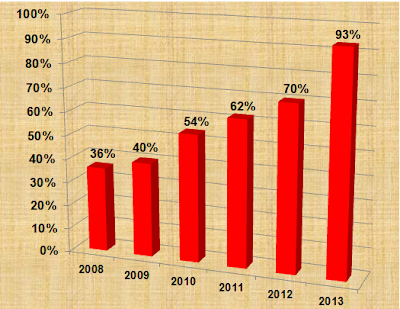 Yields (Interest Rates) on Spanish Debt: http://www.bloomberg.com/quote/GSPG10YR:IND/chart
Lowest level in five years, now at 3.87% i.e. down by half since 2012

Central Banks will subsidize debt accumulation until such time as it all explodes in our face yet again and then everyone stands around saying "Aw fuck, not this again !" 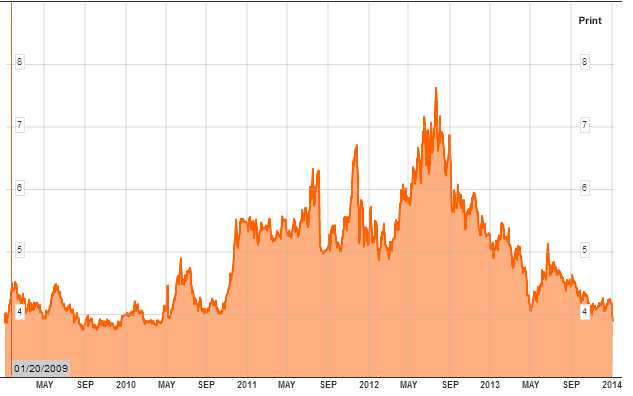 OECD (Developed World) Sovereign Debt
A 7% Compound Annual Growth Rate Across 5 years (Debt: GDP) ratio
And of course, this does not include corporate, consumer or municipal debt...
http://www.gfmag.com/component/content/article/119-economic-data/12370-public-debt-percentage-gdp.html#axzz2pRTkFy4j 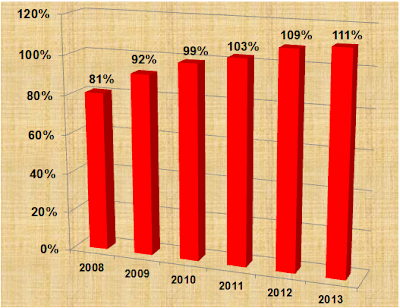 Ponzi Borrowing Japanese Style
The Japanese government has been monetizing its debt off and on for 20+ years. The compound annual growth rate in Japan's National debt is 5.5% versus average nominal GDP growth of 3% since 1990 (with massive fluctuations). The Japanese "borrow from themselves" which is another way of saying that they are squandering their own savings as current consumption and writing worthless IOUs to future generations. All of which will work great until it fails catastrophically.

What Happened to the Euro?
The Euro (red) used to be highly correlated with risk and hence the U.S. stock market
That correlation flatlined in 2012/2013 no doubt due to Central Planning (aka. monetary dopium)
Now the Euro is stalling at this level, so we'll soon see if correlation returns on the downside.
One other thing to note is that the downtrend since 2007 is firmly in place (lower highs) likely indicating relative Euro-zone economic weakness. 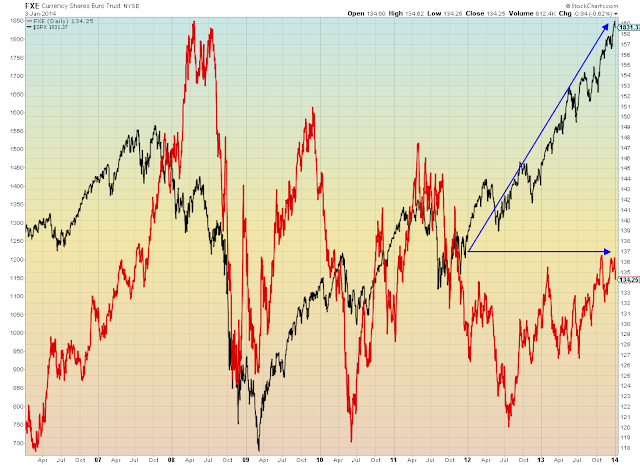 Zero Hedge
And around the same time as the Euro decoupled, hedging via Index Put Options went out the window as well... 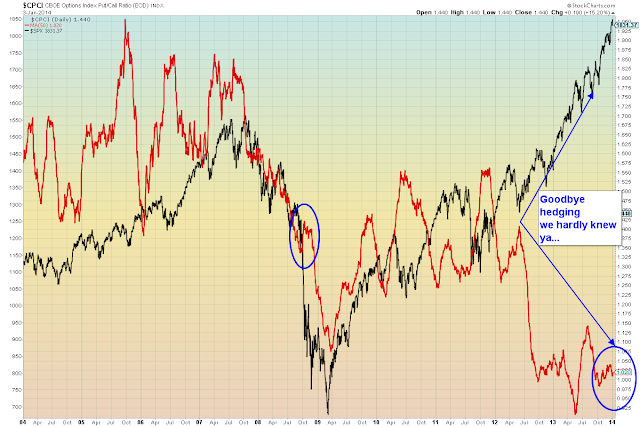 Collapse-o-Nomics
It's a multi-decade consumption binge propagated under the wholly bastardized pretense of Keynesian economics. Keynes would be rolling over in his grave to see how the Lost Boys hijacked his ideas to rationalize this unsustainable catastrophe. And how desperate are older generations to maintain the status quo at all costs during their lifetime just to have it all collapse on the heads of their children and grandchildren? Overwhelmingly desperate. No amount of borrowing is too much. Pathetic.

It's an extremely dangerous game being played here and the vast majority have absolutely no clue that it's even being played...

BTFATH (INVEST AT YOUR OWN RISK)