Rome Was Destroyed From Within

Years from now archaeologists will dig down through a mile of rubble and try to figure out how so many people could be conned into systematically voting against their own interests. It won't take them long to find the answer...


Green Eggs and Ham
Now that the government shutdown has arrived, it's time to consider just how the political system became so utterly dysfunctional. Clearly, the Founding Fathers of the U.S. would be rolling over in their graves and would find the current United States to be wholly unrecognizable. The key factors that I elucidate below however are pertinent for all nations not just the U.S. and I would submit that no country is immune to at least some or all of these risks that are inherent to democracy. I am not stating that there is a better system, however, saying that democracy is the least worst political system is damning with faint praise. Clearly when it's not functioning properly, it can be at least as ineffective as any other form of government.

Importing Third World Poverty One Container Ship at a Time
Before I get into the structural issues that can afflict any democracy, suffice to say that democracy had no chance of succeeding when placed in the hands of an infantile society overwhelmingly desperate to believe in the impossible, while literally stoned on junk food and junk culture. Add in the fact that the entire system is run by and for an ultra-corrupt power elite and the chance of long-term success was the limit approaching zero. These massively corrupt elites and their frat boy flunkies have a vested interest in promoting junk food and junk culture to the maximum extent possible, since that toxic combination is what made it possible to liquidate the assets of the stewed masses in broad daylight. America's so-called "elites" have adopted a Third World mentality towards their own population which is to exploit the hell out of them to the maximum extent possible. Get them down and keep them down. Historically, what has differentiated developed nations from Third World nations, is that the elites of the developed nations never went all in against the working class by selling them into abject poverty. The chart below shows unambiguously that with this current generation of American elites, the pact was broken. They adopted a Third World exploitation mentality against their own citizenry, and that Third World exploitation is creating a Third World economy.

From Best to Worst in One Generation: What the Fuck Happened?
The key difference between the Middle Class of the 1930s and today's Idiocracy, is that back then, the Middle Class would never sit by in a stoned food coma and watch the mass liquidation of jobs and industries that has occurred in this era. It's staggering that this is by far the the biggest economic issue faced by the U.S. today, and yet almost no one in the lamestream media - or blogosphere, for that matter, wants to acknowledge it. I suggest there is a high degree of latent guilt for a society that somehow turned the U.S. from the world's largest exporter and creditor nation into the world's largest importer and debtor nation over the course of just one generation. It was all an "interesting" experiment to see what would happen if Ayn Rand's "rational self-interest" was taken to its logical conclusion - unfortunately short-sighted preoccupation with self-interest is the domain of children and refugees, not responsible adults. History will neither be impressed nor forgiving.

Don't Try This At Home: 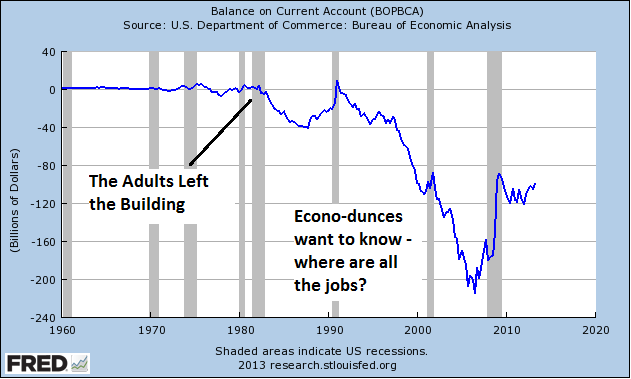 The Temple of Greed (aka. U.S. Wealth Pyramid)
The past thirty plus years was only about worshipping false ideologies inside the temple of greed. Nothing more, nothing less. 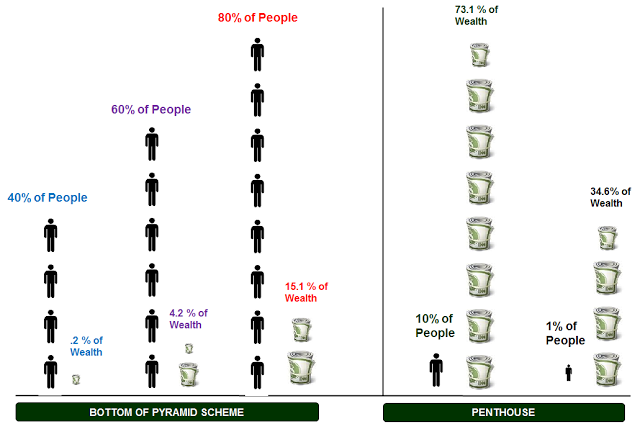 1) An Overly Vague or Otherwise Ignored Constitution:
No Founding Elder can possibly envision the future state of their country hundreds of years hence; however, powers of government and legal authority must be laid out both in a positive and a negative manner. Meaning, in absence of clear constitutional directive the various branches of government must not be unencumbered to create new laws out of thin air. The constitution needs to anticipate that a void of authority will be filled and hence lay out an effective process by which decision rights are allocated. The automatic assumption of authority - by all forms of government (least of all democracy) - is the largest abuse of power. Rarely if ever are individual rights fully considered when decision rights are being allocated. Lest we forget that the founding elders of almost every nation were themselves by definition elitists, many of whom had a deeply ingrained distrust of "the masses".

2) An Under-Educated Populace
Elitists have argued throughout history that democracy fails because the populace at large is not well enough informed to make the right decisions. Or worse still, not disciplined enough to vote against their short-term interest. That is of course debatable. However, in the present situation, the elites have taken full advantage of the ignorance of the general population and gone a step further to brainwash the hell out of the general populace convincing them to systematically vote against their own interests. Therefore placing the well-being of the average citizen in the hands of the elites is clearly not the solution. That said, how many of us even remember or use what we learned in school beyond say grade 8 or 9? I don't. I don't know who did what to whom back in 1845. I don't know anything about trigonometry and I suggest that most of us spend several years in high school learning academic facts and figures that are totally useless in the real world. Meanwhile, the knowledge and judgement that really matters is never taught. Somehow we graduate test-takers with a proclivity for rote memorization who are incapable of understanding or even recognizing their own interests. It's a total failure of education or even how we define "education" and I submit that until the system is overhauled to focus on real world knowledge and judgement, then it will continue to fail.

3) Campaign Finance Corruption:
Of course, no mention of the current snafu could pass without recognizing the outsized role of money. Every political system has its special interest groups, however over time any system that is systematically hijacked by SIGs will ultimately fail. In present terms of course, we are witnessing in real time how big money corrupts the system most recently with the "Citizens United" decision which allows unfettered funding of political campaigns by big money donors. It's a total subversion of democracy that somehow was sanctioned by the Supreme Court citing the Constitution, if you can imagine. I am just guessing that the Founding Fathers did not envision unprecedented concentrations of wealth in the hands of less than 1% of the population being used to gerry-rig elections. All of which gets us back to point (1) above. Currently there are 14,000 lobbying groups operating in Washington D.C. It's the best government money can buy.

4) Too Many Lawyers, Too Many Laws
There are more laws now than ever before in U.S. history. There were fewer laws a year ago and fewer still ten years ago. Go back 100 years and there were a fraction of the laws there are today. How the hell did those people live without so many laws? Lawyers love laws because it's their business to love laws. So having a government dominated by lawyers was going to inevitably mean that every single aspect of our lives was going to be governed by some sort of law or regulation. Not only is this massively expensive, cumbersome, inefficient and stifling, but it actually leads to even worse behaviour on the part of the general population. Instead of people focusing on the business at hand, it focuses energies on gaming loopholes. Instead of a legal system based upon the exceptions, we have a legal system based upon the rules. All of which is a major cause of economic stagnation. Get rid of the lawyers and get rid of the laws. Hold people accountable for a basic set of rules that are strictly enforced. That would force people to have personal responsibility rather than having to memorize or even understand every single law.

5) A Commercialized News Media - Garbage In, Garbage Out
I could go on about this topic all day, but suffice to say the standards of journalism have fallen into the abyss during past years and decades. The infotainment news format was a direct result of profit-maximization, turning the news into yet just another shrink-wrapped form of entertainment packaged and delivered to the delight of one segment of the population. It's junk. Total garbage. It's impossible to run a democractic system wherein every news channel panders to their own ideology. It's even worse when the ultra-wealthy oligarchs own all of the infotainment broadcast stations and therefore have free run to mate their self-serving political ideologies to the "news" broadcasts. The current media system is a total failure and until objectivity returns to journalism, democracy such as it is today, will continue circling the drain.

6) Lack of Transparency/Outright Fraud
The quality of U.S. Federal government accounting at this juncture is worse than Enron. So many shell games, inter-departmental transfers, asinine assumptions, ludicrous projections are baked into the present set of numbers, that they literally change every day. No one at this point in time can make any reasonable projection for the future solvency of the U.S. beyond looking at the current vector of various economic indicators and then making a wild ass guess. Worse yet of course, is that decisions are being made constantly based upon only the most optimistic of projections. The rights of future citizens are thrown under the bus constantly as the man-boys of the day trip all over themselves to invent new ways to bankrupt the grandchildren.