I was tempted to go postal with an epic rant today, but there is nothing left to say. Blog-blasting the oblivious Idiocracy has left even me exhausted.  You can't convince people to believe something that they are unwilling or unable to accept, regardless of how obvious or true; which means that I've been pounding sand up my ass for four years straight. This overwhelmingly corrupt society has a first class rendezvous with destiny:


There have already been major dislocations in various other markets and asset classes (Gold/silver, Nikkei, Apple, Lumber etc.), which should have been taken as a warning; so we are just waiting for reality to catch up with the overall stock market. The goal of this week was to crush the short-term speculators with a series of up and down spikes to keep them guessing and otherwise deplete their capital. Today's middling employment number was just background noise and an excuse for the HFT bots to unleash one more short-covering rally. At this rate, it will take four more years to gain back the jobs lost during 2008/2009.

Hindenburg Clusterfuck:
It may not feel like it, but the trend is now down. There have been three Hindenburg Omens in this cycle, indicating that the market is losing its leadership. Meanwhile IBD counts 6 distribution days in the past two weeks. As we see below, there have been three clusters of distribution in the past 3.5 months, so robo-market is taking serious body blows. No surprise, the market bounced right at its 50 day moving average (blue line), as it has in the past. So the question on the table is whether or not the market can yet again bounce back to a new high. As always, you know what I think... 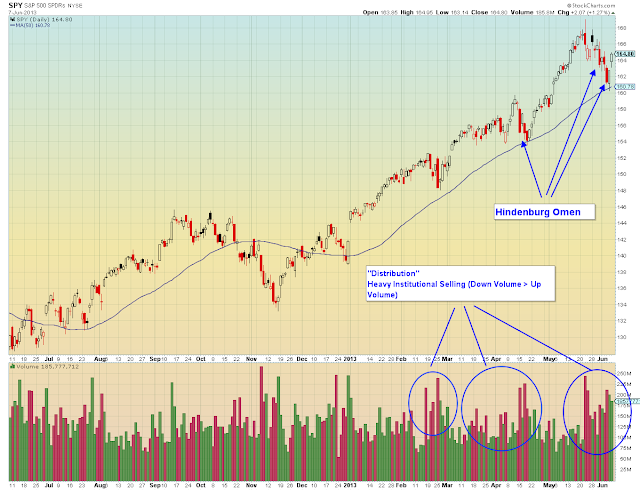 A longer-term perspective is that the market is carving out a very sharply defined top.
Below is the Wilshire total market index. Time to get busy living or get busy dying... 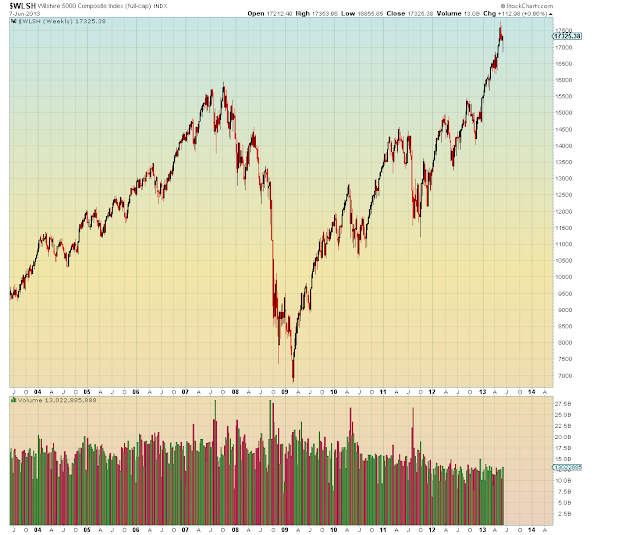 The bulls came close to shitting the proverbial brick this week, but today's short-covering rally pulled them back from the brink. A nice backtest of the Vix trend line...Of course a solid breakout will mean "incontinence products" all around: 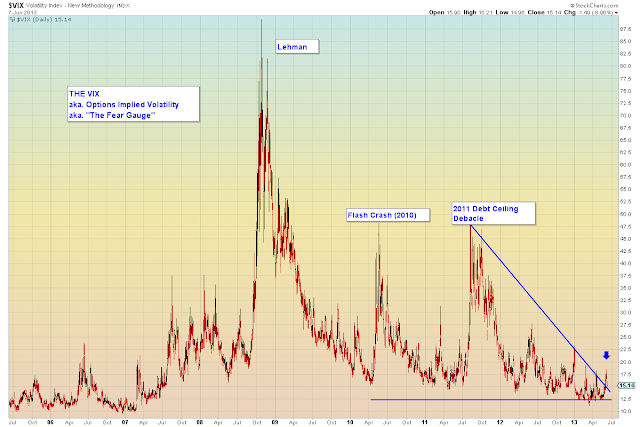 Overseas, the Nikkei officially broached the -20% bear market level, but bounced mildly near the end of the week. Major technical damage. Anyone buying the Nikkei here has to realize that there is now massive overhead resistance from trapped buyers: 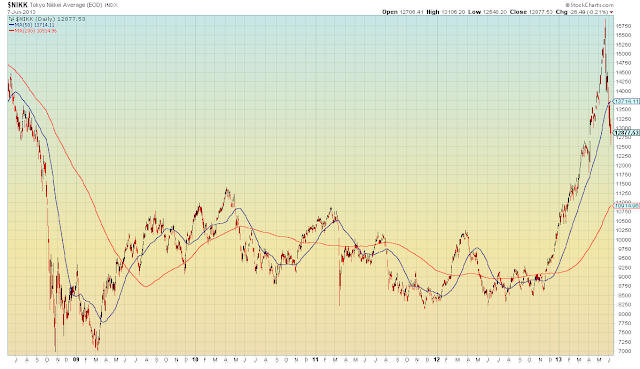 And the Australian All Ordinaries (below) sliced through the 50 DMA and into the 200 DMA. No doubt a major casualty of the unwinding Yen carry trade: 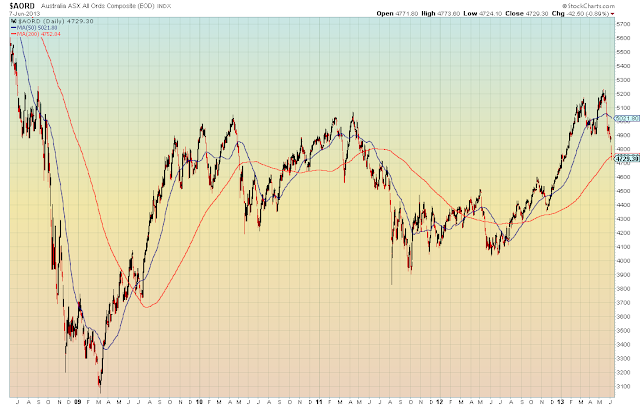 Last But Not Least
Overall, the Dow - the only thing that matters anymore, had its second biggest price gain of the year today, on mediocre volume. Junk bonds rolled over hard this week and only managed a tepid bounce on Friday, not confirming the stock market rally. The Japanese Yen, which had been declining since last October, and a major funding currency for global carry trades, put in a massive reversal this week. If the reversal holds, then global risk assets will have lost yet one more sponsor. Meanwhile, the "New 52-week highs" list cratered this week - meaning that the market is losing its leadership. Below shows New Highs- New Lows against the S&P 500 (ETF). Notice the number of massive spikes higher that occurred in the past few months relative to previous time periods - there is no comparison. For all of 2013, the HFT Bots have been ramping one sector after another to new highs and driving massive short covering. Glancing to the left during the lows of 2011, it's the exact opposite - the market bottomed when the lines were reaching for the bottom of the page. In addition to confirming that this is one massively overbought market, the chart below visually confirms the Hindenburg Omens and the manic expansion/contraction of new 52 week highs and lows that characterizes this rally: 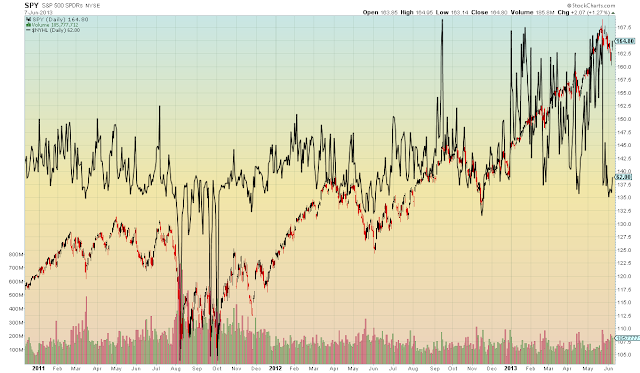