Those who still don't understand why Monetary Policy is no longer working, beyond (temporarily) inflating asset prices, are being constantly smacked in the face with the answer... 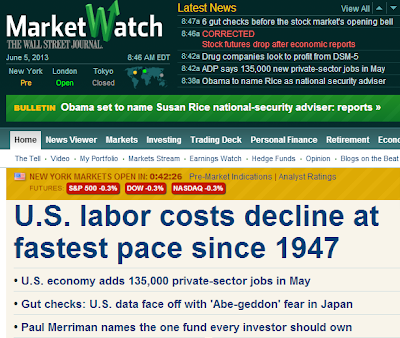 In a nutshell, economies that are already heavily over-indebted, have no transmission mechanism for cheap money to make its way into the real economy. Over-leveraged consumers in the developed world have an inelastic demand for debt, meaning that price changes (interest rates) have no effect on demand for more debt. So aside from sovereign governments that are willing to run deficits until such time as there is a sovereign debt crisis - a la Japan - the real economy just dies with each passing day.

However, across the globe, most developing nations are not heavily indebted - they are net savers, so their efforts to keep pace with the global currency devaluation will lead to localized inflation. Their consumers have an elastic demand for debt, meaning that they will take full advantage of lower interest rates and ubiquitous credit to spend more. Therefore, on a global basis, competitive debasement is a recipe either for major global unrest due to high inflation in emerging markets, or global asset crash - most likely both.

Either way, deflation is the end game and Monetary Policy can do nothing to stop it. It's all about the ever-growing output gap between global supply and demand as the middle class in the developed world becomes increasingly marginalized. Meanwhile, the developing world has no middle class to take up the slack, only poor people being squeezed between ultra-low wages and rising prices. It's Supply Side economics taken to its logical self-destructing conclusion. Every economy focused on supply versus demand. The Keynesians lost the battle a long time ago, when there was open competition with the developing world. No amount of government stimulus can offset the loss of purchasing power within the middle class. No amount of cheap junk at Walmart can make up for the massive decline in jobs and industries due to outsourcing. And to think that the "crash" hasn't even occurred yet. Imagine the output gap on the other side of another asset "revaluation", when even the billionaires stop buying new yachts.

What a fucked up society. We have a system run by and for billionaires who don't give a damn that wages are going down, because their wealth is being artificially inflated by global governments. That's the world economy in a nutshell right now. So, we will just sit and wait for the inevitable meltdown and for everyone to realize that the real problem we face is that today's "best and brightest" are neither. They are morally corrupt buffoons who got us into this mess, but have no clue how to get us out of it.