The Scylla and Charybdis of Deflation and Higher Interest Rates

Interest Rates Will Keep Rising Until Stocks Collapse.
Events of the past week confirm our thesis that Central Banks have no exit strategy to avoid asset (and price) deflation aka. "The Minsky Moment". Only a "Risk Off" event will reverse the rise in interest rates, so the markets are now boxed in...

Not Built To Last
Markets Are Now More Vulnerable to Higher Interest Rates Than They Were In 2009
Below: U.S. Thirty Year Treasury Yields (inversely correlated to T-bond prices). This minor backup in interest rates is already causing global dislocations (far right). Notice back in early 2009, interest rates were at an all time low and then exploded higher - doubling to ~5.2%. What happened then? The stock market and economy both rebounded sharply, because all three (stocks, bonds, economy) were in "reflation". Not so this time. Interest rates have only gone up by  a mere 1% which is already having a negative impact on global stock markets and is weakening an already weak economy. Monetary policy has reached its logical end game wherein lowering the price of money is no longer moving the economic needle, yet raising the cost of money (interest) brings extreme dislocation. The Scylla and Charybdis - all signs point to deflation... 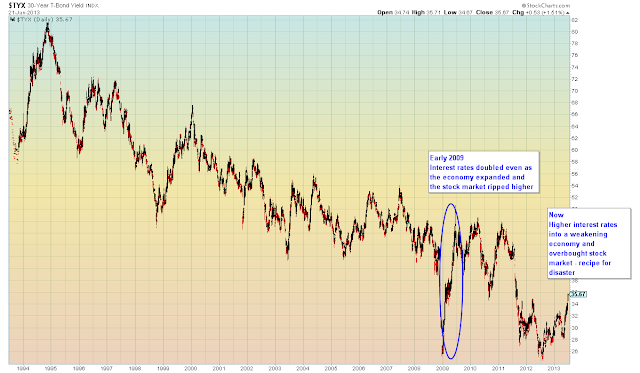 I've been ignoring the Quantitative Easing "tapering" debate, because I've maintained all along that global Central Banks are the only factor keeping asset prices levitated. Therefore, they have no exit strategy.

Case in point, all Bernankenstein said on Wednesday is that the Fed may begin to taper asset purchases later this year, depending upon the economic data. That assertion alone was enough to massively roil global markets these past two days, even though no action whatsoever was taken and asset purchases continue at the pace of $85 billion per month. What more indication do we need to prove that the Fed is the marginal buyer of risk assets than to witness a major market conniption at the mere suggestion of Fed "tapering". The Wall Street junky is hooked on monetary heroin and can't survive without it.

This decision to contemplate tapering of asset purchases is coming at a pivotal juncture, because this same week Obama indicated that Bernankenstein's tenure was coming to an end. In other words, faith in the Fed is now being widely questioned at exactly the critical juncture at which confidence in Fed policy is of utmost importance. Just yesterday, John Boehner, House Speaker, blamed the global sell-off on misguided Fed policy. So now the Fed is attempting an exit strategy with risk assets at multi-year highs (and folding as I write), while confidence in the Fed is already imploding in real time.

Extend and Pretend to the End
So the Fed is taking it from all sides, but as usual, the real story is being totally overlooked. When the Fed embarked on this new and unprecedented path of quantitative easing three years ago it was assumed that this strategy was an interim measure to be put in place until the economy was healed. The goal was to resume organic growth and otherwise close the output gap by allowing household demand to catch back up with supply. Here we are three years later and there has been no improvement whatsoever in the output gap - largely due to massive corporate outsourcing. Therefore, all the Fed did was save the consumption bubble from imploding, by making it that much bigger. In the interim, they financed several years of deficits, allowing the Federal government to borrow an additional $6 trillion to fill in the gap from lost household consumption spending. Therefore the real story is that the Fed inflated the bubble even larger and is now trying to find a way to walk away without having it collapse. Totally impossible.

Interest Rates Will Rise Until Risk Assets Collapse
Meanwhile, one scenario we also predicted is that any increase in interest rates would cause major dislocations in risk markets, thus leading to an inevitable asset crash. That is exactly what is happening now, as the Treasury sell-off is causing all risk assets to be repriced (lower) due to higher financing costs. Interest rates will keep rising until risk markets collapse, at which point inflation expectations will plummet. Then everyone will realize that the Fed was just making this up all along - The Emperor Has No Clothes. Bond yields will come down again with inflation expectations, but major carnage will have been inflicted to global markets by that time.