The Case Against Deflation (Hint: Buy Gold Early and Often)

We live in a dangerous time full of dangerous delusions.

Allow me to paraphrase the supposed "case against deflation":

To start with, only Keynesians and Monetarists don't see inflation. To all sane people, inflation, indeed hyperinflation is obvious (even though the economy gets worse with each passing day and wages are stagnant).

We are further along in the economic collapse than deflationists admit, so they are over-compensating and thereby adding too much stimulus (even though the economy continues to worsen).

The economy is worse than they admit and will definitely get much worse, but it won't lead to a deflationary asset collapse - even though gold is collapsing as I write, and I have no other logic to support the notion that assets can't collapse again. I have no faith in Central Banks and yet I trust they can continue to levitate all assets especially gold to $4,000 per ounce - pretty please Mr. Bernanke.

You can buy gold from all over my web site, so please do, even though my logic makes no sense and fully supports the deflationary argument i.e. don't trust government, because they have done nothing in the past four years and an asset collapse is inevitable...

The key takeaway is that Bernankenstein and the League of Extraordinary Banksters have convinced literally everyone - including the inflationists - that they "saved the world" from asset deflation back in 2008. Even though all they did was save Wall Street from itself and thereby allowed the bubble to grow even bigger in the meantime. It's amazing that even people who express no faith in central banks are desperate to believe that assets can continue levitating indefinitely. That is the (il)logic of someone who is 100% bought in.

Like other assets going through the same "pump and dump", gold is now broken. No one is going to buy it in size at these levels because there are layers of trapped buyers now lurking above. The bottom will be lower in price and on much heavier volume. And there will be no gold advertisements around by that time... 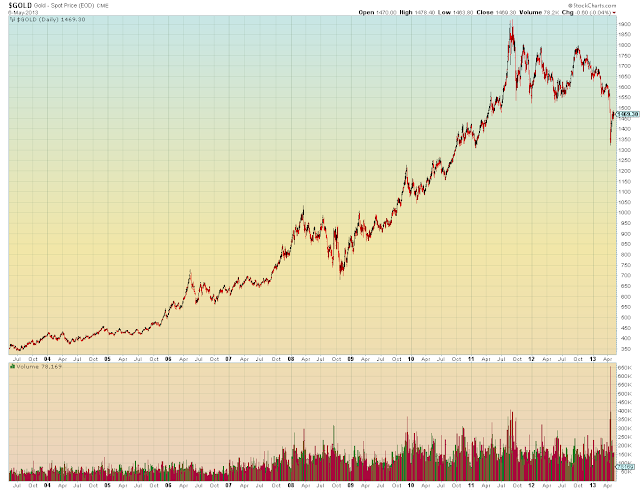