"I thought the free bailout fixed all these problems..."

When the Idiocracy realizes that they got conned yet again, the masses will claim that - no one told them a) Wall Street was still corrupt  b) HFT bots run the markets c) politicians are stooges and  d) Central Banks printing money to be used for leveraged speculation, is a bad idea. Who would know these things? But unfortunately, this morally bankrupt society has a well practiced habit of giving a free pass to its greatest criminals i.e. those at the top of the overall Ponzi scheme. Obama is now on his second term and still hasn't lifted a finger to reform Wall Street for what happened in 2008. So only a moron assumes anything there has changed. Likewise, when it was discovered that the premise for the Iraq war - Weapons of Mass Destruction - was fabricated, the Idiocracy yawned and re-elected George W. Bush...


This time, the masses will claim that they had no idea of the risks that Central Banksters were creating by injecting trillions into the financial markets to prop them up while everyone waited around for the real economy to float back from China. Then again, these are the same people who wet their pants every time the Dow hits a new high, which lately has been every day. Nothing phony or manipulated about that.

Unfortunately, the Idiocrats will have to explain away this factoid below i.e. the greatest phony rally in human history ---The Japanese Nikkei - responding to unprecedented amounts of monetary stimulus. Up 77% in 7 months, 165% when annualized.

Some things are harder to explain away than others...i.e. this is not a mispriced privately traded subprime derivative... 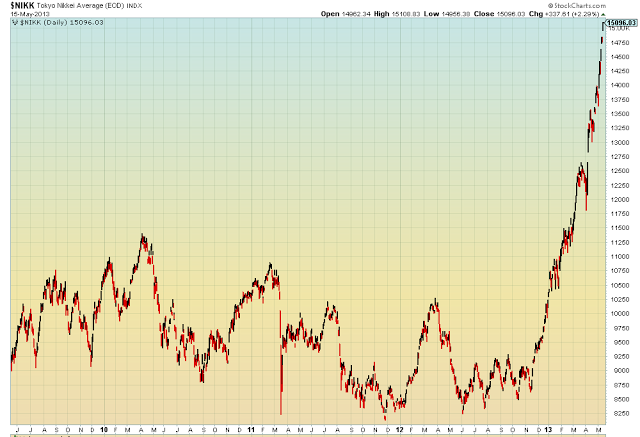 I was thinking, what market could I show for reference purposes to see what happens when the market goes up too fast and goes down even faster?

How about the Nikkei itself, circa 1990: 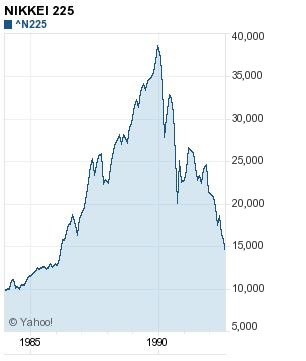