Judging by my blog stats which are now trending down for the first time in 12 months, you would think that all of the world's economic problems have been solved. Complacency has a way of showing up when it can do the most damage.

Of course, the underlying economic problems - both here in the U.S. - and across most of the developed world, are moving in the wrong direction. The Central Bank Jedi Mind Trick of levitating the Dow Jones Industrial Average at all cost, has done its job of fooling the Idiocracy into believing that things are actually getting better instead of worse...

As far as my own stats, one could argue that as long as I continue to repeat the same message over and over again, then people will get bored and move on. Fair point. That said, as long as policy-makers persist in amplifying the same lethal policies aka. subsidizing leveraged speculation, then I will continue to repeat the fact that risks are growing not decreasing - new Dow high not withstanding.

For instance, in Japan we are now seeing bond yields rising, paradoxically, even as the government pledges to buy more bonds. This in itself has the potential for massive dislocations, first and foremost because of its outsized price impacts to retiree bond portfolios. Imagine holding a portfolio of bonds yielding .32% per year only to lose 18% in two weeks, due to the fact that bond yields have tripled in that time. That's fifty years of equivalent yield gain !

That said, anyone running away from U.S. Treasuries at this juncture is likely to get whiplash, as higher yields in treasuries provide competition for now relatively lower yielding stocks. So all of these markets are now heavily interconnected thanks to Central Bank alchemy. Meanwhile, the falling yen has also been the key driver of the last several months' global stock market rally, so a reversal in the yen would be a major "risk off" catalyst affecting all risk assets. Given that we now live in a binary world of "risk on" - all assets rise and "risk off" - all risk assets fall, we can duly expect that a major yen rally will produce a long-delayed risk asset liquidation.

The VIX (index options volatility gauge) is the ultimate barometer of complacency. I've shown this chart many times before, and yet here again we see the jaws of reality opening wider and wider...this inevitable convergence between reality and fantasy will be one for the ages: 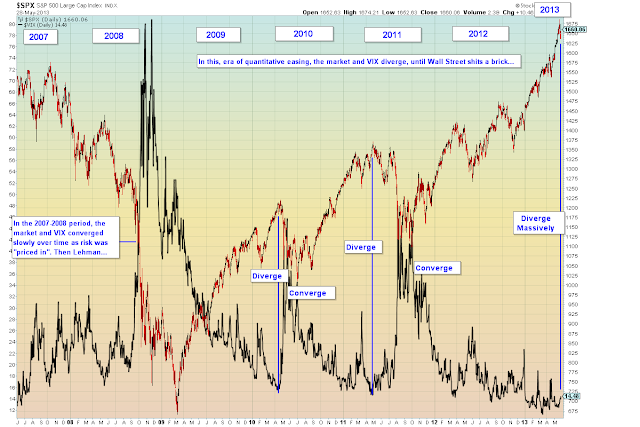