Cracks in the Facade

There were major dislocations under the surface of the markets this week.

As usual, the Idiocracy played hop scotch over the widening cracks in the pavement...

No surprise, the biggest dislocations right now are all emanating from Japan where their unprecedented asset monetization program is having global ripple effects. Just in the past six months alone, the Yen has fallen a staggering 30%. This massive move has injected huge amounts of hot money into neighbouring Asian Pacific nations, seeking higher interest rates for the carry trades. It's a similar situation to what happened back in 1997 precipitating the Asian financial crisis: Hot money in - assets bid up, hot money flows out - assets crash. 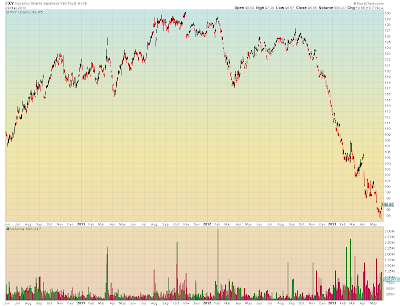 I've shown the Nikkei several times during its vertical ascent. This week, on Thursday, it was limit down over 7% and finished the week with a slight recovery off the lows: 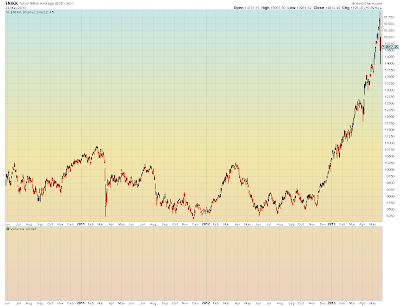 The biggest dislocation however was in the Japanese Government Bond (JGB) market where interest rates paradoxically rose from .32% to 1%. I say paradoxically, because the government's asset monetization program entails buying of JGBs which is supposed to keep interest rates low. So, according to the law of unintended consequences, they instead generated a mass exodus - as market participants took the new program as a sign of a top in JGB prices (low in yields). Clearly a rise in interest rates from .32% to 1% doesn't seem that much nominally, but on a relative basis they tripled. So the present value (price) impact on a 30 year duration JGB  was -18% (yes you read that right).

Here in the U.S., the biggest dislocations were in the retail sector where a slew of companies missed their earnings expectations by a wide margin, including Walmart, Gap, Abercrombie and Sears, which essentially imploded.

Meanwhile, the minutes from the last Federal Reserve meeting were released this week and apparently a few Fed members feel that markets are becoming too "buoyant". No kidding. The stock market did not like those remarks and had a mid-week "outside day" on heavy volume. Basically it was a gap higher and then a close on the lows of the day - Wednesday, May 22nd. As you can see below, there have been three major bouts of distribution in the past couple of months, and three distribution days in a row just this week: 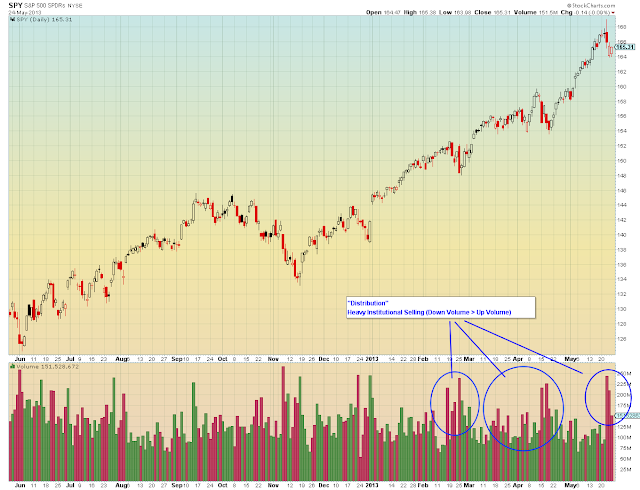 Speaking of "buoyant" markets. As I reported earlier, solar stocks were going supernova. Here, market leader SolarCity - up a mere 550% from the lows - had a mid-week pullback of 23% off the highs and then recovered somewhat by the end of the week. Albeit, still below its high of the week: 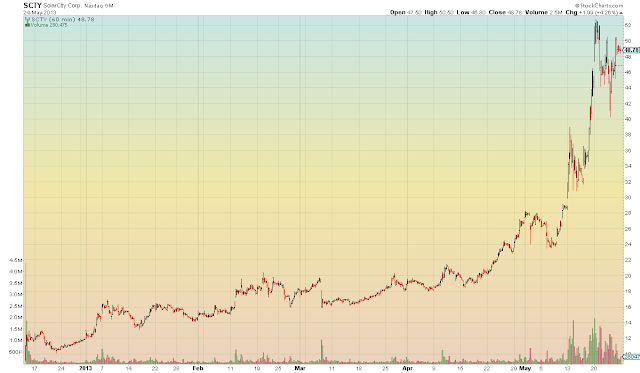 Lastly, in Europe, sovereign bonds had their worst sell-off in 8 months, but are still well below their previous highs (in yield); it doesn't take too much imagination to envision a Japan-like scenario wherein the carry trades are reversed and yields triple in a very short period of time i.e. back to where they were a year ago.

What we learned definitively this week, via Japan, is that Central Banks clearly have no idea what they are doing, and are just making this up as they go along.

As always, in the Idiocracy, nothing matters until it matters.