Ship of Fools: All Aboard, Aye

No sooner had I penned my piece indicating that the Dow (Jones Industrial Average) is the ultimate barometer of social mood, than we see this, from Barrons:

Fund managers have already tied the rope around their neck, so now we have to see if they will go bungy jumping off the bridge. Sentiment-wise there couldn't be a better set-up for a panic collapse than this one - a phony, liquidity driven market supported merely by fund manager hopium...
Of course, I am speaking from a contrarian point-of-view. Although, as I also remarked recently, short-term, computer algorithms will determine the direction of the next move - not people. Once a panic mentality takes hold, both humans and computers will get in synch to the downside.

The Central Bank Jedi Mind Trick Worked - Better Than Anyone Expected
The Barron's article indicates that 74% of money managers are bullish - a record going back 20 years ! Fund managers are bullish despite - the economy, Fed policy and Europe - the key things that matter at this time i.e. they have been brainwashed by the Federal Reserve (Central Banks), to ignore all risks. Only 7% of respondents were bearish.

Fund Managers cite rising corporate earnings as a reason that stocks will go higher - even though corporate profit margins are at a record high for the U.S. In other words, they see no connection between record high profit margins and declining wages, which are what actually drive the economy aka. the "demand" side of the equation. Why do these fund managers not see the connection between the lack of revenue growth, low wages and inflated profits? - Because they are greedy bastards?

We interrupt fund manager bullishness to announce that the number of U.S. households on foodstamps, hit a new record high this week. Apparently households are not a beneficiary of Fed largesse.

One Chart to Rule Them All - Stocks v.s. Copper
Copper is considered the commodity most highly correlated to industrial activity, given its heavy use in manufacturing. As we see, generally, stocks and copper don't always overlap, but they are directionally correlated almost all of the time. The only other major divergence was way back in 2007 when copper fell and then rebounded. The subsequent top in stocks was the high for that era's rally. As you see now, they are diverging again, so the stakes are high as to which market will be right this time. One other key point - in this cycle - copper made its high back in 2011 and has been in a downtrend (lower highs) ever since, so directionally the divergence has been continuing for two years - which is consistent with the depiction of a highly leveraged liquidity driven rally, against steadily eroding economic fundamentals: 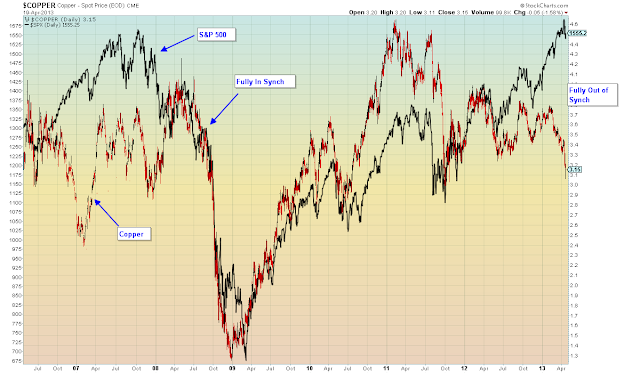 The Barron's article also indicated that 67% of fund managers are still bullish on Apple.
Let's see how that is working out: 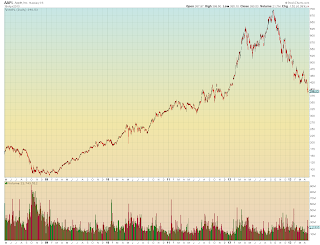 It appears, that if you don't mind your investments going the way of Apple, then it makes sense to bet along with these fund managers who are still positive on an investment that has lost half of its value since the high. Stay tuned for future events, as the rest of their investments go in the same direction.

APPENDIX: [Here are some facts and data to go along with the bullshit]


ZH, just published a scorecard on economic factors this past week, showing decline:
1) Philly Fed economic outlook was far worse than expected
2) Empire Fed (NY) manufacturing survey was expected at 7.0, came in at 3.05 (down from 9).
3) U.S. households on foodstamps hit a new record high
4) The IMF reduced the global growth forecast

The positive factors from last week?
1) CPI - inflation dropped (i.e. signalling the nascent return of deflation)
2) Oil prices tanked (and all other commodities)- meaning lower prices at the pump

Meanwhile, even worse, earnings to date have been a disaster. I just mentioned that GE and IBM - two key bellwethers, tanked on Friday. Remember, these are actual earnings - announced after many companies (highest since 2001) already lowered expectations by preannouncing they would not meet previously stated earnings goals.