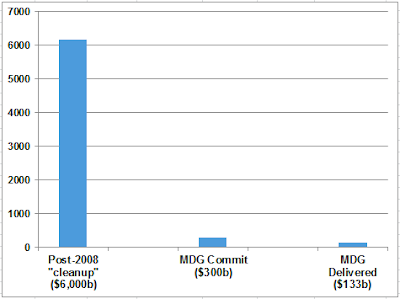 Global clerics put out another cash call this week to guilt developed countries into meeting their .7% of GDP commitment to the Millenium Development Goals (MDG) - which was made way back in 1970 and reaffirmed in 2000. Of course, these goals are all intended to improve the lives of people living in poorer nations. Unfortunately, the "wealthy" countries can only afford .31% of GNI - which is what they have delivered so far. Because we are too busy still spending 45 times that amount, digging out from 2008.  Above I present the costs in accumulated debt incurred by OECD nations since 2008.


This is a morally void society that plunders its grandchildren to pay off Wall Street's gambling debts, but can't come up with 1 cent on the dollar to help the poorest people on the planet - people who subsidize our bloated lifestyle.

Meanwhile, there is no exit strategy for these deficits which are the only thing keeping the economies afloat, so they will continue until one by one the developed nations succumb to bankruptcy. A process that will go slowly at first and then all at once...

The 2008 Crater
Yes, that's $6+ trillion in "clean up" costs. And no, I did not include the bailout costs which we've been told have been fully paid back. All I did (below) was add up the amount that OECD (wealthy nation) deficits increased after 2008 and summed it up over four years. I subtracted the pre-Lehman deficit of -3.4% completely out, so the $6 trillion is what has been incurred purely as a result of the Wall Street debacle...

Four years of accumulated deficits equals 45x the amount delivered to the MDG over 40 years ! These figures below are for All OECD nations combined in $billions: