BTFD - Bring Your Own Underwear...

[Updated April 26th, 2013]
You wouldn't know it by the headlines, but market internals are extremely weak right now. The real question on the table now isn't whether or not the market will drop, but where will it stop...


There are many glaring divergences discussed below, but by far the biggest one is New Highs - New Lows. This entire week was an "up" week, but as you can see the new H-L still fell way short. And look at the range of the spikes recently - the algos are desperately rotating sector by sector to keep the uptrend intact. This will all resolve forcefully to the downside as it always has in the past. The market is overbought and exhausted: 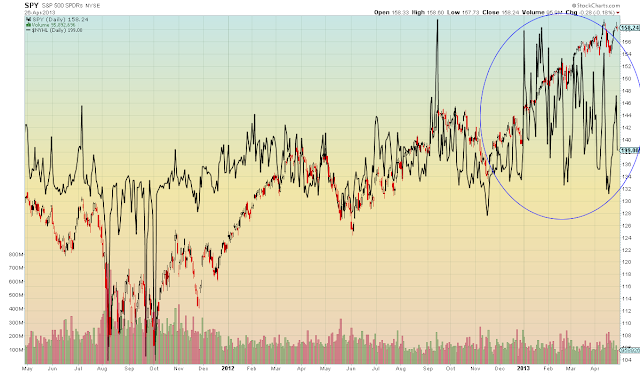 Another Fractal to Consider on the R2K - With at least two precedents. 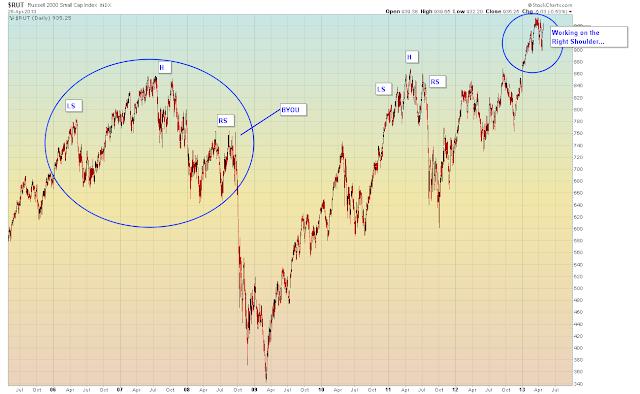 [Original Post: April 22nd, 2013]
Market internals continue to weaken, even though today was an "up" day.

The Mclellan Oscillator that I showed last week, continues to make lower highs - and look at volume (lower pane) - up volume nowhere near down volume: 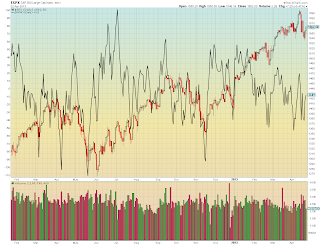 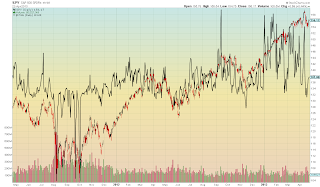 The number of stocks above their 50DMA collapsed lower when it hit the level marked by the blue circle - as it has done every other time: 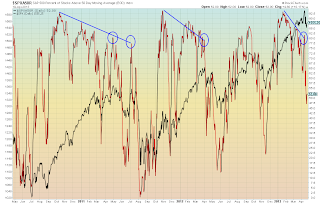 You get the idea - it's a very weak market, so upon rollover, the real question is how low will it go?

There is a scenario on the table similar to the top in 2007 wherein the market falls and then bounces at its neckline and makes a new high. Below is the fractal I am alluding to. This is the scenario Avi Gilburt is expecting, who is the Elliot Wave guru currently over at MarketWatch. He has been right all year, calling the market like it's his personal ATM machine. Notice in this timeframe the neckline intersects the uptrend line, both of which could provide support for a bounce. Also, given that institutions have been heavy sellers lately, they could use their newly-raised cash to come in to support the market at that level: 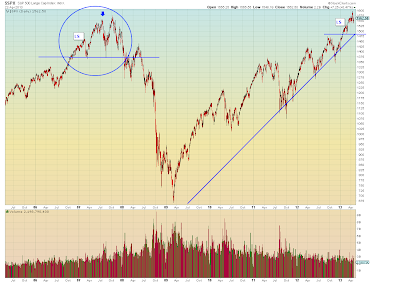 So, it's a high stakes game - will we drop ~5% then bounce to a new high or not? As indicated above, past history and the current technical set-up suggest a repeat performance is possible which would fake everyone out to a new high, then fall into the abyss. That said, I still have the Jeff Cooper waterfall decline in front of mind (although it's very noteworthy that he too contemplates the 2007-style double top high scenario as well).

For those who are wondering, here is what the 1987 waterfall crash set-up looked like - a high, a failed bounce and then a face plant... 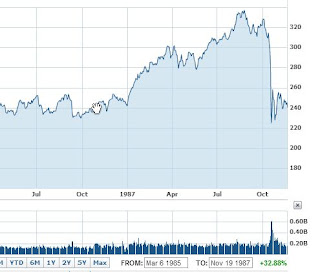 Suffice, to say if we slice through the uptrend line and/or don't get a solid bounce to a new high then the risks of heading straight into a 1987-style dislocation mode rise dramatically due to the weak market internals. For my part, given the various dislocations we have already seen - in Bitcoin, gold, commodities and the fact that most foreign markets are already one step ahead of the U.S. has me thinking (as always) that risk is to the downside sooner rather than later...