Brown Swan Event:
A highly predictable, in fact inevitable, risk event that everyone knows could happen, but conveniently assumes won't happen in their lifetime...[The full definition here]. In other words it's just another form of self-delusion that allows Baby Boomers to fool themselves into thinking that they are conveniently shifting risks on to the next generation. The same way they start wars that they don't have to fight, despite being the generation that invented burning of Draft cards. To wit, all recent Presidents have had no military experience despite involving the U.S. in the most protracted conflicts in U.S. history. It's a Milton Bradley defense strategy invented by Neocon dunces, none of whom themselves have any military background. The Military Industrial Complex of course is a major component of the U.S. Kleptocracy. I don't know how these Generals in the Pentagon looks themselves in the mirror knowing they have bankrupted their own country. Osama Bin Laden never dreamed that 9/11 would cause so much self-inflicted damage. History will speak of how one man inadvertently felled an entire global empire, by radicalizing Faux News and its comfort-seeking audience who saw terrorists on every street corner; and in every Home Depot, where after 9/11, I was stalked by a guy who apparently thought I was a terrorist buying a garden hose (yes, I am off-white).

Where was I...
No surprise, Wall Street was wholly unprepared for today's abysmal jobs number. Non-farm payrolls added 88,000 jobs for March v.s. 268,000 in February. The real news was that nearly half a million people gave up looking for work. Monetary policy - the Jedi Mind Trick of the masses - has therefore driven a chasmic disconnect between risk markets and the underlying economic fundamentals, generating overwhelming risk, which of course is fully ignored. Is there any more indication we need - beyond this latest jobs number - that the status quo "Extend and Pretend" is solely about boosting the portfolios of the rentier class while the middle class fall by the wayside? Like my discussion of Japan last night, U.S. policy-makers can't get out of their own way and can't otherwise take meaningful steps towards fixing the economy...


Deflation Is Upon Us
Per ZH, U.S. Macro data has plunged in the past two weeks. And contrary to the stock market which essentially blundered straight into the bad jobs number, once again the more clear-headed, less greed-fogged Treasury market has been rallying for weeks in anticipation - with yields having now retraced their entire rise since the beginning of the year. Tonight EWI can tell us that their, incomprehensible call for higher Treasury yields was wrong yet again. Why anyone would expect the risk free rate to rise when deflation expectations are accelerating is impossible to understand. These people wrote the book on deflation, yet they don't have the discipline or judgement to take their own advice. Unfortunately, this isn't a fucking parlour game. Before this is over, yields will be negative on long-term treasury bonds, and they will be the only safe haven. Last night, no sooner had I penned my piece on Japan than ZH reported that Japanese Government Bonds had collapsed, limit down. Europe is not safe, Japan is not safe, Gold is not safe - it's not liquid enough. That leaves only the U.S. as a safe haven. And those who say that the U.S. dollar is safe but Treasuries are not safe, only prove they don't know anything about the markets...there is no such thing as "cash" for big money. And suffice to say, that if the long overdue, unwinding of the Yen/JGB trade is truly underway after twenty years of near zero interest rates, then that would be the mother of all dislocations. As ZH points out, last night's move was a 13 sigma Black Swan - which on the Brown Swan scale means it was 100% guaranteed to happen...


Thirty Year Bond Yields Fully In Synch w/The "Economy"(stocks, not so much) 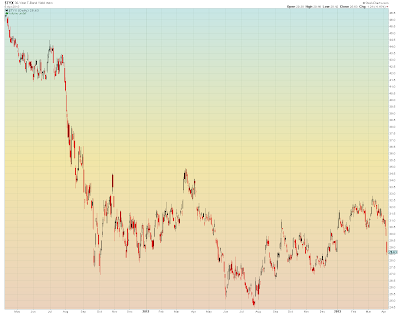 1987 Redux?
Is the UK FTSE leading world markets down in a Third Wave? Unlike the U.S. markets, it peaked in March (same as Dax), and is now beginning another leg down...If so, Monday will get interesting and the Bulltards who bought the dip here in the U.S. on Friday won't be making that mistake again. It would be overwhelming irony if Wall Street bought the dip on Friday thinking that a bad jobs report was good news for them - in the form of more Bernankenstein dopium - only to realize they liquidated their hedges in the face of another meltdown. Speaking of which, Jeff Cooper, whom I have been following for 12 years, says trade on the Russell 2000 below 932 and a failed retest of its 50 day moving average could set-up a waterfall decline similar to 1987. He is unorthodox to be sure, but the last time I bet against him was way back in late 2002. The market had been declining for two years and he was getting bullish saying watch out for the "Crouching Tiger" reversal formation. I wrote back that it was a "Crouching Tiger, Hidden Rally". Two days later the .SPX ramped 22% in three weeks. One of us got their smart ass handed to them and it wasn't Jeff Cooper...