In the past two years the entire global financial system has been in turn held hostage by Spain, Greece and now Cyprus. Soon a Seven-Eleven going tits up will require ECB intervention: 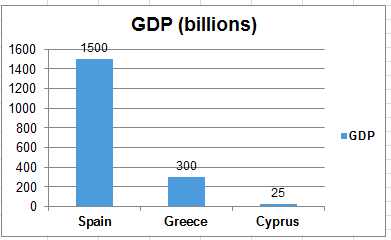 This was all predicted by Minsky in his treatise, the "Financial Instability Hypothesis", which I summarized in my own style, here: "Minsky v.s. Bernanke".

As we learned today, all European depositors were affected by the events that transpired in Cyprus this past weekend. Now, apparently the Cyprus "resolution" was seen as a template for future actions, meaning all depositors of countries with weak banking systems are at risk of future "deposit taxes" i.e. haircuts to fund the bailouts. This realization caused the S&P 500 to roundtrip from a new all time high, to close 15 points below the high of the day.

Why would a U.S. market respond so negatively to a European event?  Because there are now only two markets in Ponzi World: "Risk On" and "Risk Off".  Therefore it's highly pertinent that we all know which one we are "long" and which one we are "short". Because that will make all the difference.

Or in Minsky speak:

"the greater the weight of speculative and Ponzi

finance, the greater the likelihood that the economy is a

Given the current historically unprecedented amount of monetary stimulus, aka. leverage, aka. margin aka. speculative debt, we have every reason to expect "amplified deviation".