The media, government and general public ignored Occupy Wall Street, choosing to deride them as "lazy hippies". The commonsense OWS message was that Wall Street needs to be reformed immediately, to avoid a repeat of 2008. Unfortunately, the dunces at large will believe a lot of things - anything really -  but reality is not one of them. So by taking their usual path of least resistance and willful ignorance, the soon-to-be-bankrupt Idiocracy has unwittingly sealed its own fate.

Below I lay out my comprehensive thesis as to why an epic global markets collapse is inevitable and imminent...

Economic Fundamentals Point Down
My primary thesis is that Central Bank monetization programs are obscuring the fact the the primary economic trend is down. Just this week, we learned that fourth quarter GDP was negative for the U.S., UK and Germany. The stock market shrugged it off. Who cares when the Fed is implicitly "supporting" the market? More importantly, the economy has become a zero sum game. Every company cut costs after 2008 to save their profits. In the event, they boosted profit margins to the highest level in the past 70 years, but of course laid off their end market aka. the middle class. So while profit margins are higher, overall profits are under pressure as revenue growth stagnates. Of course, none of these MBA morons have figured this out yet, so they keep cutting headcount over and over again as the economy sinks further into oblivion.

Speaking of oblivion, as we see below middle class incomes have been declining since 2007 (table A-1, page 31), and are lower than they were back in 1996, so we don't need fancy economics degrees to figure out that $8 trillion of combined fiscal and monetary stimulus is not working. $5 trillion in new Federal debt for 5 million new jobs - that's a million dollars apiece... 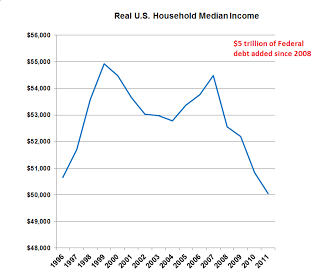 How Long Can the Fed Support This Market?
I suppose this is the real question on the table. The Middle Class has been suffering for years with no real consequence to the markets, so some would argue that they will just go quietly into the night? Barring a violent revolution, the question is how much of a disconnect between the underlying economy and the markets withstand? I have shown myriad charts, but I still find the "rocket ride" chart to be the most compelling. What it shows is that the Fed has been adding ever-more stimulus to the markets which have been going ever more vertical. I am not in the camp that believes that this will continue indefinitely. Ultimately, the Fed Monetization programs which constitute a "flow" of new money (i.e. $85 billion per month, currently), are a drop in the bucket compared to the total "stock" of global capital assets which is north of $200 trillion. Therefore any significant asset reallocation away from risk assets, would cause major dislocations. What could cause this aforementioned asset re-allocation? Any major geopolitical event. Or, just realization that the gap between economic fundamentals and prices is too wide. Or, the "Minsky Moment" when the marginal borrower, must begin liquidating. For starters, a reversal in the now parabolic Euro would likely crush Spanish and Italian bonds back to crisis levels, due to the forced unwinding of that carry-trade.

Broken Markets
Substantially compounding "reallocation" risks at this juncture is the fact that as I showed recently, stock market volumes have been falling steadily for the past four years, and we know that 70% of the remaining volume is now high frequency and other computerized algorithms, the likes of which caused the 2010 flash crash.  Over the past four years as HFT bots replaced traditional market makers, there has been a rising occurrence of flash crashes not just of the entire market as in 2010, but for individual stocks as well. Usually these "events" are covered up quickly by the exchanges, so they don't spread panic. Ironically one of the leading HFT firms "BATS" had to withdraw its IPO last spring, because its own stock flash crashed on opening day. Therefore it's extremely likely that a mass sell-off across all risk assets at the same time, on heavy volume would lead to "non-linear price discovery" (aka. crash).

Retail Exuberance
Recently we learned that the retail investor has finally returned to the markets after a four year hiatus. What Wall Street considers the "dumb money" showing up four years into a rally, does not make me bullish.

Sentiment:
As Daneric, and many others have pointed out, sentiment is now off the charts.

I have shown that the index put/call ratio, has had more low readings in January this year, than in all of 2007.

Definitely the most disturbing indicator right now is the low level of the VIX (options volatility index), which is indicating extreme complacency. The six year range in the VIX is between 12.5 and 96.5. This week it settled at 12.9.

Tom Demark:
Demark has the best track record for market timing on Wall Street. Granted, no one has a perfect record.

Earlier this month, he said we are approaching the key ("13") number of exhaustion buying days. We recently surpassed his projected price levels (SPX 1492), which he said would occur in a "blow-off" mode. The fact that we took out his blow-off price levels and and kept rolling, somehow does not make me bullish.

He also said Europe would roll-over first, which we are definitely seeing in Spain, although the UK FTSE and German DAX are still holding near recent highs. 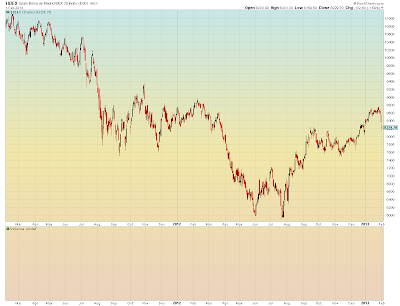 Wall Street Paid to Look The Other Away:
Most disturbingly is the fact that Wall Street is ignoring all of the bad data, because they are heads down in the Bernanke feedbag. This just means that they are as usual choosing short-term profit at the expense of long-term consequences.

The Bottom Line
Occupy Wall Street was the right movement at the right time to highlight the ongoing risks and drive for reform on Wall Street before it was too late. However, the media, government and the Idiocracy at large, just laughed off OWS as a cultural aberration - unemployed youth with too much time on their hands. If you want to gain the trust of the Idiocracy, you have to be highly "productized", as I pointed out recently. Perma-smiling sociopaths in nice suits are highly preferred. In reality though, this bloated society had no real interest in changing the status quo, as always preferring the path of least resistance and willful self-delusion, preferably with a bag of Cheetos. Suffice to say, it will be a mistake they will never forget.