A Village of Idiots

As we would expect at this juncture, the self-nominated "best and brightest" are providing great spectacle with their war of words and infotainment, all while the real risks simmer in the background, wholly unnoticed by the Idiocracy and the mental midgets running the U.S. and global economy. The latest diversion from reality, is a feud between Paul Krugman and Joe Scarborough that started when Krugman stated on "Morning Joe" that the Social Security\Medicare crisis should be ignored until the day the programs collapse around 2025. Brilliant !  Milk the system for all it's worth and then bury the grandchildren under a mountain of debt ! How did we get so lucky to have this kind of thought leadership?

Just as I teed off on right wing conservatives a few weeks ago for their never-ending military blunders and tax cuts for Mitt Romney, I would be remiss not to point out that the limousine liberal morons who think that borrowing the U.S. into the abyss and then handing the tab over to the next generation, are equally morally bankrupt. Krugman's ongoing assertion that the debt can be ignored indefinitely of course could be refuted by any 3rd grader, so I am not even going to go there. Suffice to say however, that between these right wing spendaholics and the left wing spendaholics, America's next generation has about as much chance of survival as a choir boy caught between two priests. George Bush's role in history was to steer the U.S. straight at the abyss, and Obama's role is to ride the U.S. straight into it.

Borrowing is the economy
So for the village idiots now shouting over top of each trying to prove who is the bigger idiot, below is what a non-amortizing debt looks like. The figures at the bottom are the compound annual growth rates for the deficit, GDP and the debt over the past 12 years. Meanwhile, as we see, the deficit is still 6% of the so-called "economy". Therefore, one table proves that Krugman is a fool to believe this can go on indefinitely with no adverse consequences. Meanwhile Scarborough and other jedi mind tricked buffoons are delusional to believe that spending can be controlled without bringing about an economic collapse. Just last week we learned that a mere $15 increase in the payroll tax tanked Walmart sales - the worst monthly start since 2006. On top of that, we learned that 4th quarter GDP was negative despite a 6% deficit ! Obviously the U.S. has never really been out of recession these past five years. Only a corrupt moron thinks that borrowing constitutes an honest expansion. Yet, even by those morally bankrupt standards, this economy is entering its fifth year of "expansion" following 2008, which means it's in overtime. We also know that deficits rise when the economy contracts, so the 2012 deficit is highly likely to be the lowest we see in a long, long time. But, let's not allow the facts to get in the way of a good story...

One thing all of these buffoons have in common is that when this ends, sooner rather than later, they are all going to shit their pants in unison and say "no one saw that coming !". Krugman of course, doesn't predict anything bad coming out of this. Whereas Scarborough is in the very crowded inflation camp. Unfortunately, when consumers can no longer afford the cheap crap sold at Walmart, that does not bode for inflation. And contrary to the Idiocracy's belief, artificially propping up the stock market for five years does not create inflation. Predicting inflation as the worst case scenario at this juncture, is analogous to thinking that a night with two priests implies eight boring hours of prayer study.  So there's plenty of scope for both of these self-delusionals to be highly surprised by how all this turns out...

p.s. U.S. Federal debt has been growing at a consistent 9% compound annual growth rate since Reagan took office over 30 years ago, so this past decade's growth rate is by no means an outlier. Here is what things look like in 2025 with nominal GDP growing at 4% and debt growing at 9%: 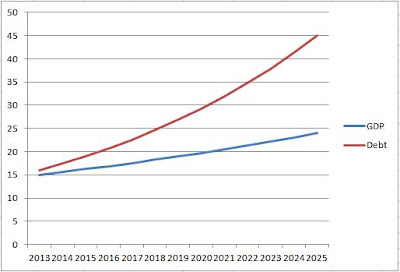