Wall Street Is All In, And Then Some...

I noted a week or so ago that the index put call ratio was showing unusually low values in the past six weeks.

So I decided to look more closely at the last six years' worth of data.  Going back six years, I found that 223 days had index put/call ratios below the magic "1" level, which is roughly 15% of the total population.  So 85% of the time the index put/call ratio shows puts significantly outnumbering call options, as index options are typically used for hedging large portfolios.  I then graphed the distribution of these 223 values below "1" as you see below (my analysis is after the jump)... 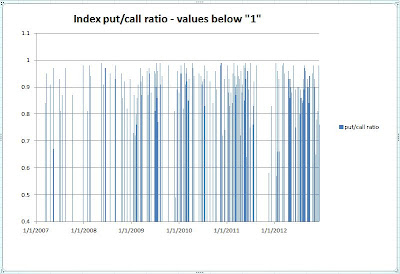 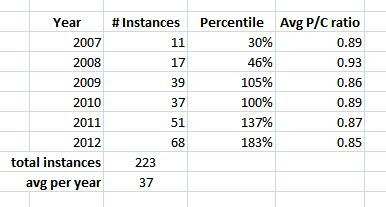 The overall takeaway given the large number of days this year (68) showing put/call ratios below 1 is that increasingly investors are betting on the broader market versus individual stocks, which means hedge funds are becoming closet index mutual funds. The other key takeaway is that investors are significantly leveraged to this market.

To confirm these findings I turned to the open interest put/call against the largest Tech ETF, the notorious "QQQ" from the DotCom boom days.  According to this chart from Schaeffer's Research, open/interest (blue line) has fallen off the chart and is now well below any other value in the past two years: 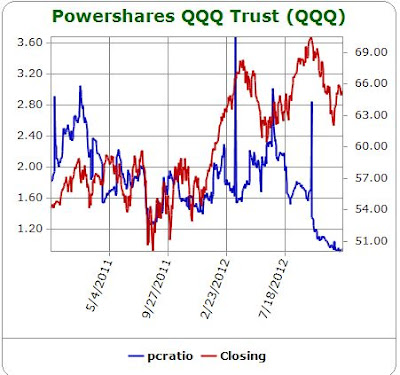 Another confirmation, comes via ZeroHedge, where they show implied (options) volatility across all asset classes at multi-month lows.  I notice also that many in the financial press are rationalizing these low volatility values as a "new normal".  The reality is that low market volatility is a direct result of Central Bank drip feeds to HFT bots which has smoothed out volatility.  The ironic and deadly net effect is to create a market in which hedging becomes very unprofitable leading to declining put/call ratios noted above.  As always, these perceived low risk "new paradigms" work until they fail catastrophically.

Conclusion
Wall Street now only has three weeks until their end of year bonus, and they are pulling out all stops to keep the market levitated and add as much risk exposure as possible.  If it works, they *may* be able to save their jobs.  If it doesn't work, body parts will be strewn far and wide...