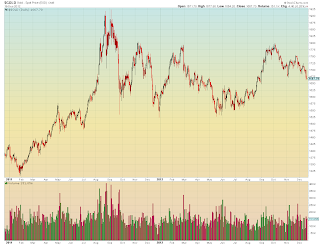 Gold got nicked again today and it's now significantly underperforming its "Risk On" cohort (stocks, junk bonds etc.).  Let's see, a couple of days ago, Municipal bonds rolled over, now gold.  One at a time, risk assets are leaving the party, meaning fewer and fewer places to hide.  Zerohedge is trying to rationalize the decline in gold as being caused by a hedge fund liquidation. First off, given the overall underperformance of hedge funds year-to-date, that should be a major red flag - widespread hedge fund redemptions.  Redemptions that force asset liquidations into a low volume market are clearly not conducive to market stability.  Anyone remember Janus Fund circa 2001?  The gift that kept on giving...Secondly, once you start rationalizing your losses, then bigger losses lie dead ahead.  Don't ask me how I know that...


Speaking of reversal of fortune, the hedge fund that was "supposedly" liquidating its gold was run by John Paulson who made billions shorting the subprime market, in what many on Wall Street called "The Greatest Trade" ever.  That sums up Wall Street - they view a guy making billions off of mass foreclosures and personal bankruptcies, as a success story.  Life savings wiped out, children uprooted, rampant divorce rates, lives ruined.  Paulson, being yet another Harvard Alum, is just the latest proof that Ivy League sociopaths are hell bent on destroying their own country by every means possible. In days gone by, America's great men were considered those who actually created something. In this morally bankrupt era, the "great men" - Paulson, Romney et al. are the ones who tear things down and make billions in the process. The ultimate vulture society, liquidating everything in its path. This is a cautionary tale for any country that chooses to worship Ayn Rand's false mantra of "Greed is Good", by taking capitalism to its self-cannibalizing extreme.  The dark side of greed is decadence. Decadence yields to anarchy. It all ends in (semi) automatic gun fire, as we are now learning. Yesterday, fearing gun control, the Idiocracy emptied Wal Mart of all its assault rifles. Fortunately, Costco and 7-Eleven still had plenty...

Ironically, now, Paulson is facing back to back years of massive losses, so as usual, Wall Street "skill" was really only luck and exploitation.  With the average investor having left the market, expect a lot more "successful" hedge fund managers to be packing it in, given they have no one left to exploit.

And suffice to say that if someone like Paulson who has billions and a hotline to Goldman Sachs, can't make money in this market, then the machines have taken over completely.  We are now just waiting for them to go full Skynet...