The Idiocracy Has Come Up With A Plan To Avoid the Fiscal Cliff... 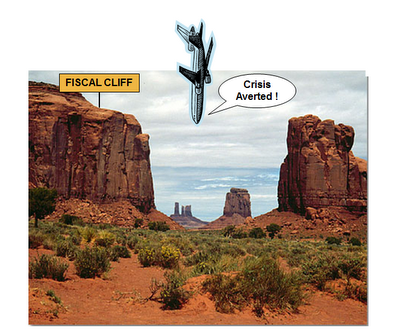 "...our wisdom, too, is a cheerful and a homely, not a noble and kingly wisdom; and this, observing the numerous misfortunes that attend all conditions, forbids us to grow insolent upon our present enjoyments, or to admire any man's happiness that may yet, in course of time, suffer change. For the uncertain future has yet to come, with every possible variety of fortune..." - Solon

It's that time of year again when everyone is making predictions about what will happen in the coming year. Most would-be prognosticators start out by saying that macro predictions are a fool's errand and therefore just a parlour game. That's a convenient way of disavowing any form of accountability for when the prediction goes sideways.

Adopt the Official Position: Bent Over, Head Straight Up Own Ass...
This is the biggest problem we face. Everyone thinks that predictions about the future are purely based on personal biased fantasy as to what we think or want to happen. However, this viewpoint that no one can predict the future, is a crucial aspect of the overall Extend and Pretend brain washing program. It's absolutely vital that we all stick to the official party line that despite all of the asinine decisions made to date, we have no clue how all of this will turn out. Unfortunately, as we learned the hard way, during the DotCom bust and the Housing fiasco, relevant predictions about the future are not based on what we want to happen, they are based solely upon what already has happened.

Speaking of accountability, I said this time last year, that 2012 would be the Year of Living Dangerously.

Below were my predictions for 2012, none of which came to pass:

Clearly, I was wrong at least in terms of timing. So now we face a choice, to assume that because these predicted events, all of which are 100% correlated, can't happen simply because they did not come to pass in the last 12 months - Or dust these off and assume that once again reality is merely delayed, not denied.

Not surprisingly, I will choose the latter path, at risk to my already tarnished credibility, so the above predictions will be my predictions for 2013 as well. Since I have spent the majority of my blog posts going into the details behind those predictions, I won't attempt to justify them all here now. At minimum, many would wonder why my primary prediction of a Euro collapse did not come to pass. Back in August, when Mario Draghi went all in and said he would do whatever it takes to defend the Euro (i.e. buy sovereign debt), he paved the way for the mother of all carry trades - borrow in USD @1% and buy Spanish/Italian bonds @6%, leverage up 4x and wait for the end of year bonus check, which should be clearing any minute now. Continued belief that this massively leveraged trade won't unwind violently as these underlying economies sink ever deeper into depression, is the fool's assumption.  Speaking of fools, just today I came across Barry Ritholtz telling us that the current Fiscal Cliff vote is nothing like 2008's TARP vote in terms of its impact and importance, and "only fools thinks there is any resemblance". At the end of his post, he also admonishes us to make our "list of fools" for future reference. So, I am making my 2013 list of fools, starting with Barry Ritholtz at the top of the list. I am not going to rebut line by line his discussion points, only to say that this current fiscal cliff vote is every bit as impactful if not far more so than TARP was back in 2008. His only valid argument is that these are completely separate types of policies and programs. Aside from that, every argument he advances is totally specious, and convincingly proves that BR, like all other comfort seekers, has fully bought in to Extend and Pretend forever and ever, and ever.

He starts out by saying that the "economy" is better now than it was back then.  Sure, except real median wages have been falling steadily since 2007, there are 5 million fewer jobs now than there were in 2008 thanks to relentless outsourcing, the national debt is $5 trillion higher, the deficit is twice the level it was back then - which more than fully accounts for the bogus "3%" GDP growth he cites i.e. today's deficit is 10% of GDP. If we are willing to borrow 10% of GDP to have a mere 3% GDP growth, why not borrow 20% and have a 13% growth rate?  Oh stop, that's just silly talk...Lastly, we are completely dependent upon Central Bank debt monetizations to keep this shit show levitated.  Monetizations that were only a twinkle in Bernankenstein's eye back in 2008. So not only does Ritholtz implicitly accept money printing with no exit strategy, as a sound economic policy, but he assumes that it can continue indefinitely.  And as far as his "then and now" market comparison, again, he too has been conned by the Central Bank Jedi Mind Trick into believing that artificially inflated markets levitated solely by Central Banks and HFT bots pose no risk whatsoever.

In a nutshell, the reason I believe that this era is far riskier than the Lehman period in 2008, is precisely because of all the above mentioned props and devices that have been put in place merely to give the illusion of a sound and stable economy. Therefore, we face a simple choice to fully buy in to the Extend and Pretend fantasy and thereby assume that borrowing and money printing can continue indefinitely with no adverse consequences.  Alternatively, we are left to assume that it's all just a well crafted willful delusion that will end very abruptly in financial and economic disaster.

The Sirens Of Deflation Are Beckoning...
The market is a cruel mistress and we are being headfaked into oblivion, to be sure.  However, this chart of the overall market as depicted by the Value Line Arithmetic Average, gives perspective on just how tightly coiled this entire shit show really is...Who among us would have predicted even five years ago that the U.S. Fed would monetize $3 trillion in debt and then embark on an open-ended commitment to monetize indefinite amounts of U.S. debt and yet gold would still be below $2,000, the S&P 500 would be at a level it first reached back in 1999, and inflation would be contained? 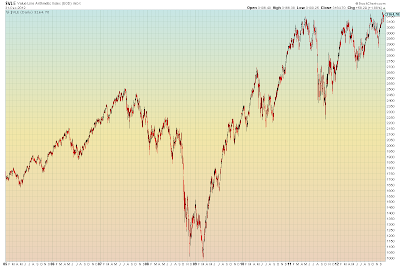