Treasury Yields Are Breaking Out (To the Downside) 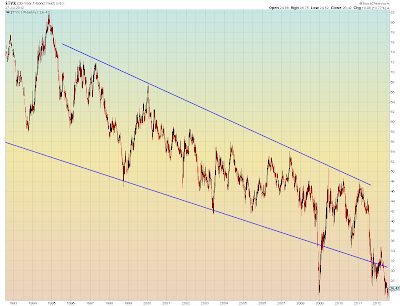 More importantly, if anyone had said prior to 2008 that Central Banks globally would be monetizing north of $3 trillion in government debt then we would all be 100% in gold at this juncture.  And yet for all that, not withstanding a great 10+ year bull run in gold that ended last year, at this juncture gold can't get out of its own way.  Unfortunately for the gold bugs, the inevitable hyperinflation they prophesied, has failed to materialize.  I know, it's due any moment now, but the chart above combined with the decelerating global economy, prices of gold, oil and copper all argue to the contrary.  China's stock market, which represents the great engine of growth, is at a three year low.

The Mother of All Output Gaps
Hyperinflation has failed to materialize because the 30 year industrial arbitrage between East and West has laid the foundation for the mother of all output gaps between consumption and production.  On the consumption side Western consumers have leveraged themselves to the tune of 300%+ of GDP (varying by nation).  The marginal consumer is tapped out and his leveraged assets (aka. homes) continue declining in price, thereby reducing collateral.  Add in stagnant or declining incomes, diminishing jobs, and rising fixed costs of healthcare and education and it's clear that the middle class is maxed out.  Meanwhile, over on the production side, the 30+ year secular trade surplus gave rise to the global "savings glut" which has led to massive over-investment in output capacity.  In other words, the global arbitrage over-subsidized both consumption and investment, setting the stage for the inevitable divergence between supply and demand; a divergence which will become fully apparent on the other side of credit deflation when the gap will widen massively, exerting a deflationary overhang for years.

In Deflation, It's All About the Fixed Costs
Given the above, it should come as no surprise that government fiscal policy can't even attempt to bridge this burgeoning output gap.  Government spending ranges between 25-50% of GDP in Western nations and most governments are already running massive deficits.  So even incremental increases in government spending still lag the relentless demand destruction occurring in the private sector.  Meanwhile all that money pumped out by Central Banks just sits idle in the banks or finds its way into the stock market prolonging the disconnect between fantasy and reality.  The 800 pound gorilla in the room that NO ONE wants to accept is that this output gap is only starting to materialize, yet as the chart above shows, it's gathering momentum as credit destruction takes its relentless toll on demand.  If policy-makers are clueless now about how to deal with the burgeoning gap, just wait until that output gap breaks wide open.   More importantly, lifestyles (aka. fixed costs) that seem manageable, albeit tenuously, under the current paradigm of East-to-West subsidized consumption, will ultimately exert a death grip on the middle class when that subsidy inevitably disappears.