While we await the Krugman Moment which will invariably lead to the Minsky Moment, it's time to identify the key false assumption underlying this entire debt-sponsored Ponzi Scheme.  I call it the 'Krugman Assumption', named as such, because Paul Krugman is the leading Keynesian Economist in the U.S. and his ideas have been not surprisingly embraced wholeheartedly by the current Administration.  As always however, at the heart of every "too good to be true" story, there is one key assumption that everyone MUST  take for granted in order to sell the lie to the media who then sell it to the general public. 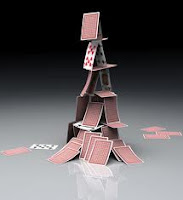 Step back for a moment and consider the Keynesian (fiscal) policy premise: the goal is to replace private spending with public spending during a recessionary/depressionary period, long enough to allow private spending (demand) to recover.  So here we are in the U.S. borrowing close to 10% of GDP for the fourth year in a row, waiting for Godot, that magical point in time when private spending will close that gap and obviate the need for continued public deficit spending.

And herein lies the false premise aka. Krugman Assumption:  The assumption is that the base level of private expenditure going into this crisis was ever sustainable in the first place.  In other words, we are assuming that the private over-expenditure which led to artificially inflated GDP (and the 2008 debt crisis) can now be indefinitely replaced by public over-expenditure thereby propagating the same level of artificially inflated GDP.

And that unfortunately is the delusion we all live under, which is that the standard of living we had going into this debt-sponsored mess was ever sustainable in the first place.

(Re)-Presenting The Illusion Formerly Known As The Economy


One chart to rule them all

This chart (below) of U.S. Federal Government debt says it all.

It took 229 years, from the founding of the country to 2005, for U.S. Federal debt to reach the $7.75 trillion mark (which by coincidence is roughly half of GDP).  In just the 7 years since that date, the debt has doubled again to $15.5 trillion (as of this writing): 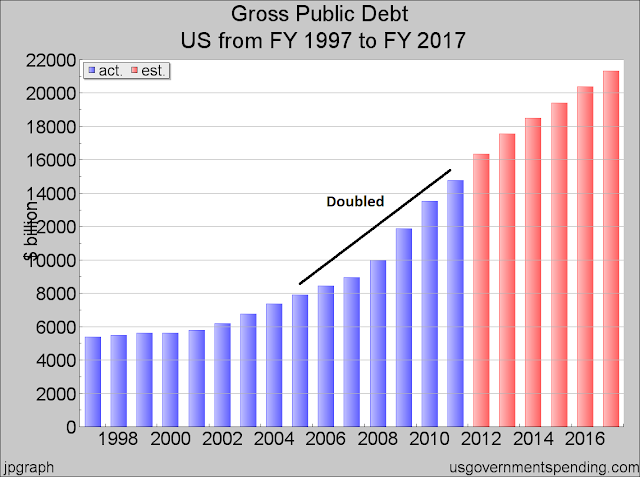 And as you can see above, the red extrapolation into the future shows that the debt will be triple the 2005 level within just 4 more years.  So the debt accumulation ratio is 229:7:4 [single:double: triple] i.e. the debt accumulation rate is still accelerating and yet the economists tell us that the economy is recovering !  Politicians at the behest of their rent seeking special interest groups are borrowing the country into oblivion. 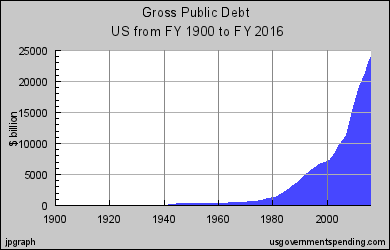 Postscript:
Many Economists speciously use debt to GDP to say that debt levels are falling relative to GDP.  I say speciously, because as long as debt is being used to falsely 'grow' GDP, then those comparisons are totally misleading.  In other words adjust Nutter's figures by removing the 10% of GDP we borrow on an ongoing basis (aka. the deficit) and it shows that there has been no deleveraging whatsoever !  Meanwhile, at a net effective tax rate of 20% of GDP, the growth rate of GDP needs to be 5x the growth rate in debt in order to offset the increased borrowings.  I have advice for the 'Nutter', why don't you borrow 10% of your salary against your house every year and give yourself a raise?  Go ahead, you deserve it...