Instead of spouting my usual rant, I thought I would let the pictures do the talking:


First, some overall perspective.  The Russell 2000 small cap index was the leading index from 2003-2007, in terms of percentage gain.  Since that time, it has gone absolutely nowhere.  The chart of the R2K below, graphically illustrates the concept of attenuation i.e. a market going nowhere, using up a lot of buying power, with each spike of shorter duration.  The green lines box out the timeframes.  (L, H, R = Left, Head, Right = head and shoulders top).  As you can see, the symmetry of these three tops each on a different scale, is extremely foreboding: 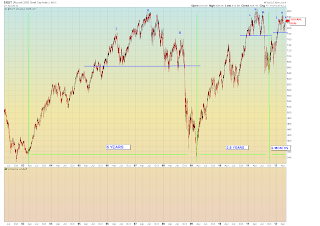 Tech Echo Bubble:
I am not a hardcore adherent to Elliot Wave Theory by any means, and I especially don't believe that it can be used in the short-term to predict the next market move i.e. far too many possible permutations and interpretations.  However, on a longer-term timeframe, it can be very compelling.  Below is the Nasdaq 100 showing a picture perfect 3 wave correction of the year 2000 blowoff top.  The most recent top (marked 'C' on the right) is the final leg of the a-b-c correction that has retraced exactly 50% of the 2000 top.  Assuming this is correct, then the next major move is down, big time.  Notice how unlike the Russell 2000 small stock index above, the Nasdaq has made a major new top relative to last August, 2011. 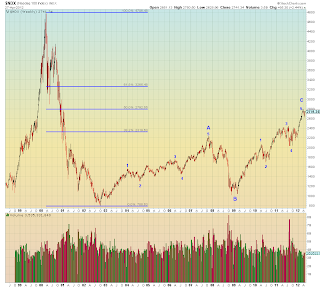 Thanks Ben !
Below is an updated chart that maps Central Bank policies to stock price movements.  This is the Nasdaq 100 again (similar to above), except the time range starts from the 2003 low, which gives a better perspective on the extreme vertical moves that have occurred since the 2009 low.  The blue box to the left was during Greenspan's tenure at the Fed when short-term interest rates were lowered to 1% and inflated the housing bubble.  The red box shows the market on steroids when short term interest rates were first lowered to ~0% AND Quantitative Easing (buying of long-term bonds) which even more massively inflated the money supply.  Each time the Fed stopped buying LT bonds, the market tanked (i.e. Flash Crash in 2010 and the mini meltdown last August).  In October of 2011, the Fed started 'Operation Twist' (not shown on the chart), which ends this June and is another long-term bond buying program (aka. QE 2.5).  The ECB also launched their own liquidity programs called LTRO (1 and 2) where they lend to European banks who then turn around and buy sovereign bonds.  As this article explains, all LTRO has done is load up European banks with garbage debt.  Lastly, as you can see graphically, and as I explained here, Central Banks have absolutely no exit strategy for these 'liquidity' (money printing) programs which artificially prop up markets: 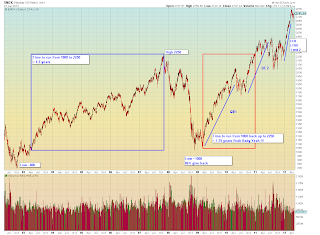 Dow Theory Non-Confirmation Revisited:
An updated chart showing the Dow Industrials (candlesticks) relative to the Dow Transports (black line chart).  The Dow Transports are still below the highs from last August, signalling underlying fundamental economic weakness.  The concept of Dow Theory is that a divergence between Industrials and Transports means the rally can't be trusted and is likely a big head fake - in this case it's a liquidity driven rally benefiting a few high growth sectors but not the overall economy: 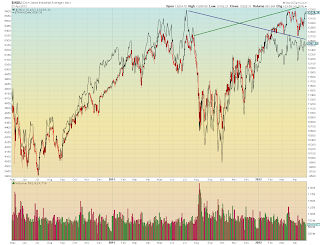 There is a Bull Market Somewhere:
So we know from above, that the money is not in the small caps and it's not in economically sensitive (cyclical) stocks like transports.  We know it's in the Nasdaq somewhere... 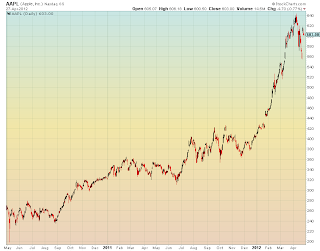 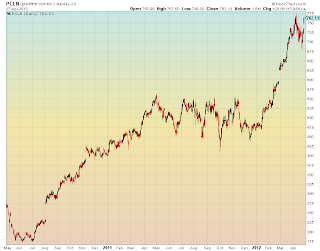 Last, but certainly not least.
One of the few stocks actually making a new high this week is Sturm Ruger - the gun manufacturer.  While all the Yuppies are out there buying their new iPads, all of the Hillbillies are taking Ted Nugent's advice and buying guns by the bushel.  (As always, you can't make this shit up): 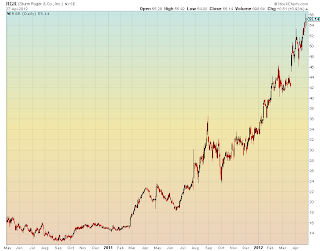 Postscript:
Clearly we don't need fancy charts or data to tell us that all is not well in Fantasyland.  Just ask any average citizen who is falling further behind on his/her payments with each passing day.  All of these trillion dollar Central Bank liquidity programs are solely to prop up the crack whores on Wall Street and their ultra wealthy brethren.  These trillions do nothing for the Middle Class other than to drive up the cost of everyday expenses (i.e. food).  Yet, the sycophantic Mainstream Media, who are totally devoid of any commonsense, can't stop broadcasting out of touch bullshit artists, proclaiming "let them eat iPads".

The age of bullshit is ending.  And as the Sturm Ruger chart above indicates, it won't end quietly.