According to Jim Cramer, there is always a bull market in something, somewhere.  Instinctively, I typically  hew to the polar opposite view from Cramer, but in this case I have to agree, we are in the mother-of-all-bull markets - that is for BULLSHIT.  24/7 we are relentlessly bombarded by glassy-eyed bullshit purveyors who are too bought-in to the status quo to imagine anything different. let alone reality.


Meanwhile, as I mentioned in my last post, we were potentially setting up for a down up sequence, which has now played out in spades.   As you can see in the chart further below, the S&P undercut its August low, bottomed out on Oct. 4th at 1075 and has since ramped ~225 points in 3 weeks or about 19% in absolute percentage terms - that's ~1800% when compounded annually.  The steepest full month rally since 1974 and for its timeframe of 3 weeks, the steepest rally I can find for any time frame - in history.
But like Dotcoms, real estate, silver, gold, oil etc. etc. trees don't grow to the sky.  This rally was brought to you by hedge fund short covering and by equity mutual funds desperate to make up for losses prior to their fiscal year-end which for most mutual funds is 10/31 i.e. 2 days from now.  Coincidence?  Sure.
Meanwhile, simmering unrest continues to spread globally and here in the U.S. with the nascent Occupy Wall Street movement, which is just a playful version of what is to come.  Bloated comfort seekers across the Lamestream Media continually ask, what do these young troublemakers want anyway?  It's a mystery!  Here's a hint - how about a job, a future and relief from the debt burden accumulated by these self same jackasses who question the goals of these protests.  Let's start there and see where that takes us.  Every time I hear one of these tone deaf idiots say this movement has no goals, I just laugh and think - give it time, it's coming - reality knows where you live, Faux News Retard.
Miraculously, those looking to protect themselves financially get one more shot, right now.  Although these vertical rallies have a way of convincing everyone that once again everything is A-OK.  As EWI just indicated, once we start the next move down, these levels in the stock market, first reached in 1998, will not be seen again for another age - years, if not decades.


Fortunately the Treasury bond play continues to massively outperform every other asset class this year.  Long-dated Treasuries as indicated by the TLT ETF exceeded even my bullish expectations, running to 125.  They have since backed off to ~111 which is a 38.2% retracement of the entire run - a perfectly normal retracement level.  The outsized move in Treasuries was compliments of the copious fools who had shorted Treasuries and then subsequently got their faces ripped off.   Suffice to say, the Zero Hedge/Peter Schiff/Marc Faber/Nassim Taleb/Jim Rogers hyper-ventilated hyperinflation trades (long gold/emerging markets/short treasuries) are once AGAIN leading to the downside, this time for good.  It's been a who's- who of fools on this crowded ship.
These were the ones who told us that the Debt Ceiling debacle would kill Treasuries - Treasuries rallied.  Then the U.S. debt downgrade was going to kill Treasuries - again they rallied.  Then the Fed. ending QE2 and not initiating QE3 was the death knell - so Treasuries responded by going parabolic.  All of which merely augurs for a persistent and deep deflation of unprecedented proportions.  Come to find out, it will be ok to gain 0% on your money when prices for everything are soon-to-be falling 10% year over year and the Euro is collapsing like a cheap tent.
Below is the current disposition of the again artificially levitated market, courtesy of short covering and the reach for end-of-year performance.  Bear in mind that while most Mutual Funds have a 10/31 year-end, most hedge funds have a 12/31 year-end.  So the HF 1%ers desperately need to keep this party going for another 2 months !  Anything is possible, but given the vertical disposition of the chart below, one has to assume that some HFers will be edging out of the door sooner, trying to gain advantage on the rest.  Given the unspoken herding nature of the HF community, one can see early exit yielding to stampede and then to panic... 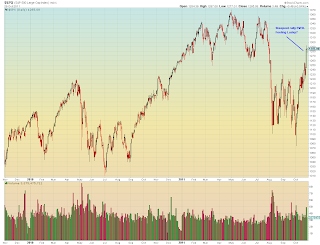 The reason for being ultra-bearish at this juncture is not short-term stock market manipulation - that's standard practice, it's the position of the stock market on a long-term basis, as indicated by technical analysis and Elliot Wave Theory.  I am not a hardcore adherent of EWT, but I do find it very useful as a broad frame of reference and as way of understanding and evaluating potential scenarios - scenarios far outside the boundaries of most stock market prognosticators.  For those who prefer a more fundamentals/economics based view, in any case, nothing has changed in the past 3 weeks to all of a sudden warrant or sustain higher markets.  That's evident even by reading the local newspaper.

Turning to the technical/EWT set-up, what makes this situation highly critical, is the fact that market is attenuating - with each rally of shorter and shorter duration.  That sets up what is called a Third Wave event i.e. alignment of third waves at all degrees of trend (timeframes).  Third (out of a possible five) waves are always the strongest waves and when they align at all degrees of trend it means retracement failure at all degrees of trend.  Picture the far right side of that rally pictured above, who is the marginal buyer?   Those who bought the market since the March 2009 low were fat and happy until they were scorned at the August top shown above i.e. they were in the money for max. ~2.5 years and they never reached the prior 2007 high of 1575.  Those who bought the most recent bottom (Oct. 4th) have been right for about 3 weeks.  Technically speaking, we are making lower highs (downtrending) with each rally attempt of shorter duration.  That in a nutshell is attenuation and indicates that the bulls are running out of firepower and headroom.


EWI went ALL IN bearish last Friday, and I strongly concur.
Position Accordingly.
Posted by Mac10 at 9:39 PM