This leg down is Primary 3 that will draw prices well below the 2008 crash low, as depicted below (off by a few months, but the overall trend is clear): 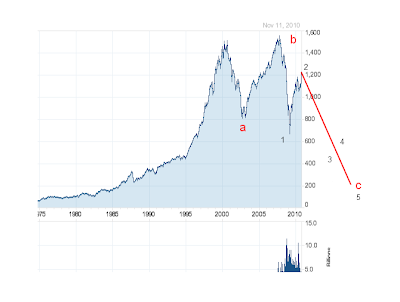 What is truly amazing is that as you can see in the chart below, we are already well into this crash and yet the average pundit is still in denial as to whether or not we are even in a bear market !  There is also debate as to whether or not we are in recession.  This is deja vu of 2008 when these moronic debates were occurring even as the markets were signalling economic collapse.
Current market position: S&P @ 1200: 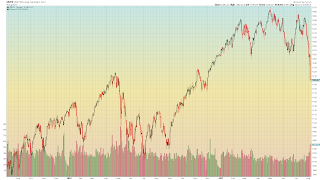 Further market rationalizers tell us that we are told that the market is deeply "oversold" by several measures and due to bounce back at any time - code word for opportunity to sell on a bounce and cut their losses.  Unfortunately, as we saw for the past two years, markets can remain irrational far longer than many investors can remain solvent.  So while betting against the trend was a fool's game on the upside these past two years, now it's equally likely that betting against the trend will be a fool's game on the downside.  What is even more amazing about this latest selloff is that the options measures of investor anxiety are still relatively sanguine.  To wit, the volatility index (.VIX) is just today at the level (~32) it reached in March during the Japanese Tsunami, but well below the level (47) that it reached at last year's flash crash in May 2010.  Moreover, VIX futures are almost as flat as a pancake indicating that investors expect short-term volatility but are not concerned enough to hedge longer term.  Meanwhile the put/call options ratios are well below where they were in mid-June when the market had a minor sell-off !!!
Meanwhile, gold which has also been had a great rally to-date, reversed down today on massive volume, similar to the reversal in silver back in April.  As I have said, these trades are "risk on" trades highly correlated to Bernanke's QE2 program which ended this past June.  Speaking of QE2, it's only been a month since it ended and yet the Greedbots on Wall Street are already begging the Fed for a dose of QE3 !  And wasn't the end of QE2 (bond purchasing) going to lead to much higher interest rates and lower Treasury prices?  Well, as it turns out, bonds have had their sharpest rally since 2008 these past couple of weeks - go figure.
Unfortunately, the vast majority are too young, naive or otherwise oblivious to history to understand credit deflation.  Credit deflation means the money supply is shrinking as risk assets collapse and loans are liquidated via default.  All risk assets denominated in dollars will eventually fall in a credit deflation scenario.  Fortunately, we now know with 100% certainty that the debt ceiling self-induced fiasco was all just a political game and a giant head fake to get people to sell Treasuries.  Too bad, since as expected Treasuries are turning out to be the only safe haven.  Constantly I hear from the inflationists such as Ron Paul, that hyperinflation is around the corner and the U.S. is the Weimar Republic reincarnate.  Unfortunately that is the uninformed view of history, because the Weimar hyperinflation occurred in 1923 - a full 5 years after the end of World War 1.  And what conditions transpired in the intervening 5 years?  Crushing debt-induced deflation - as the reparation conditions from the Versailles Treaty decimated the economy.   In other words, Weimar hyperinflation wasn't the problem, it was the solution, because it allowed the currency to inflate relative to the fixed cost of the debt, it also induced the Allies to renegotiate the terms of the reparations.  Not to say I welcome hyperinflation, only to say that even the Austrian School economists who are the ultimate advocates of hard money admit that:


Yet, derided as the "boy who cried wolf", us "perma bears" have repeated our warnings often enough that the average comfort seeking denialist has convinced himself that nothing untoward can happen - certainly nowhere near as bad as 2008 which is constantly labelled a "once in a lifetime event".  They are happy to assume that because we doomsayers have been wrong so far, that we will never be right.  Which explains a lot as to why no one predicted the intensity of this selloff and more to the point why no one is panicking...yet.