As far as assumptions, I suppose the fundamental assumption is that without Government stimulus (fiscal/monetary) the economy is not self-sustaining and therefore would quickly succumb to the deflationary forces of the total debt burden.

Therefore, the pollyanna scenario of a self-sustaining economy without ongoing fiscal and monetary intervention is not represented in this model, and I assume anyone reading this blog in the first place, gets that.
Most likely scenario: Deflation then Hyperinflation
As depicted by the blue lines and as described vividly throughout my posts, I expect another even stronger market event than the one we experienced in 2008, which would be extremely deflationary.  Those who believe it would not be deflationary, forget that both oil and gold tanked during the turmoil two years ago.  Where I indicate that a policy is "blocked", I mean politically blocked.  Given the newly elected Republican-dominated Congress, the likelihood of either the Gov't or the Fed continuing to add "stimulus" unfettered, is highly unlikely.

As you see, I have represented a "Default" scenario under which the U.S. Gov't repudiates its debts, as a potential scenario, given the new political backdrop - a scenario I thought highly unlikely until recently.  I still think that an outright default is unlikely, making the "middle scenario" of MASSIVE fiscal stimulus combined with massive monetization, essentially devolving into de facto currency printing (via FDIC payouts, stimulus checks etc.), as the most likely scenario.

Less likely scenario: "Status Quo", leading directly to Hyperinflation
This is a very popular scenario these days, causing the big run up in gold.  In order to believe this chain of events, you must make certain unlikely assumptions:
1) Assumes no adverse market "event" similar to 2008, which as indicated was extremely deflationary
2) Assumes that an inevitable backup in interest rates, would itself not cause the economy to stall and the markets to collapse
3) Assumes there would be no political intervention in the current stimulus trajectory and that fiscal and monetary stimulus would continue unfettered (seems very unlikely)

Pollyanna (impossible) scenario: Self-sustaining economy and removal of all stimulus
This scenario is extremely unlikely, given:
1) Overall magnitude of Government stimulus, now baselined into GDP
2) No sign of sustainable economic growth, especially in a low/no leverage environment
3) Massive outsourcing which has caused long-term secular unemployment and removed entire industries and skillsets from the U.S. economy i.e. the unemployed have skills that are no longer in demand in the U.S.
4) Massive debt overhang that will continue to put deflationary pressure on the economy
5) Unresolved Social Security and Medicare deficits

Threading the Needle->All paths lead to hyperinflation...Eventually
While, as indicated in the model, all paths lead to hyperinflation, it could take some time to get there.  Keep in mind, there are a whole lot (most) of other countries that will go bust before the U.S., which in the "short-term " will increase deflationary pressures and demand for U.S. dollars as a safe haven.  Any country that does not issue debt in its own currency (i.e. entire Euro area and Eastern Europe) will highly likely default.
A U.S. default, were it to eventually occur would "collapse" the U.S. dollar - relative to what, is the question i.e. other currencies would be similarly debased.  Relative to gold and silver is the likely answer.  Inevitably, what is left of the already-weakened banking system would be obliterated.  That part of the economy supported by borrowing and lending would be gone, along with a substantial negative economic multiplier.  Residual private debts and fixed contracts would be a crushing weight on the economy and likely lead to the "Weimar" scenario of printing currency to eliminate the residual debt burden.  I do not believe any Government on the planet has the will power to keep from printing its way out of a deflationary depression on the order of magnitude we will face, while confronting mass social unrest on an unprecedented scale.
Printing and distributing enough physical currency to even partially offset the amount of derivative "money" in the credit-based system, will not be a trivial ordeal...As one would expect in our Fractional Reserve Banking Model, physical currency currently represents only about 10% of the total "money supply" (M3).  So imagine a world where (even temporarily) the majority of money in circulation, is eliminated  i.e. a cash-only economy - the Euro too, long since having been abandoned.  In this scenario, inflation would build over time, likely very slowly initially and then accelerating.

Timing is Everything
All of this is highly speculative, as the scale of monetary collapse described above will be unprecedented and accompanied by substantial geopolitical strife and domestic anarchy.  Sequence is hard enough, timing is impossible to predict accurately, however, I see the overall scale of the model below in the 3-5 year range, perhaps ten years maximum.  Some things will likely occur faster than expected, whereas other phases will likely drag out much longer than expected.

Invest at your Own Risk

Therefore, given all of the potential paths and scenarios, it's not at all clear how one would successfully navigate a crisis of this magnitude.  Surely some amount of hard cash, gold, rice and ammunition is in order.  For the time being, I still like U.S. Treasuries (all durations) here.  I would also view a (large) pullback in gold as an initial buying opportunity with the goal of scaling in to a substantial position eventually...

For those in Canada, I like 3+ year duration Government of Canada bonds, which you can buy through a brokerage account (NOT Canada Savings Bonds, which are totally illiquid - can't be traded). 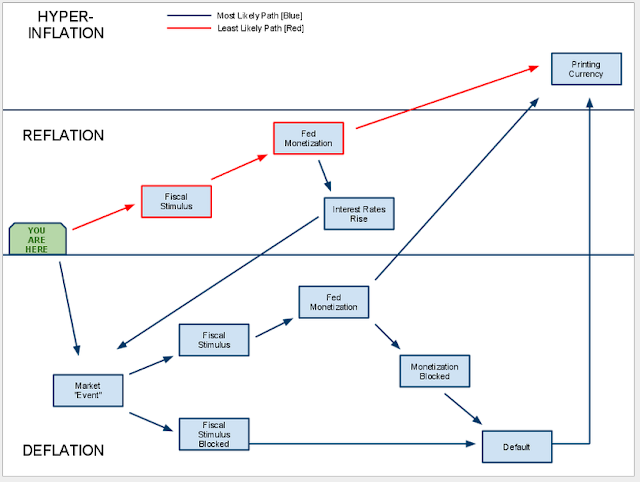