Make Being An Idiot Great Again

What we should all want out of life is to get away with being uneducated serial fucking morons...

I want to go back to what I wrote back in August 2014, the last time oil collapsed, to update my thinking on the subject of peak oil. Back then, the supply side aspect of my hypothesis: over-investment leading to price collapse played out in spades, as oil fell -76% in just over a year. But since it wasn't yet the end of the cycle, the demand side of my hypothesis had yet to play out. Now as we see below, they're both coming to a head at the same time... 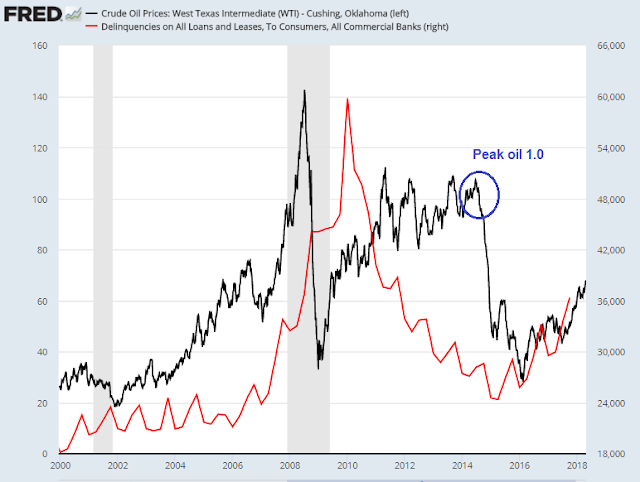 The central tenet of the peak oil hypothesis isn't that the world would one day run out of oil, but that oil would become ever-more scarce requiring ever-more capital investment to extract it. This constraint would lead to very wide price swings from rock bottom below-investment-level prices during recession, to "tight markets" and skyrocketing prices at the end of the cycle i.e. what we are seeing now - prices that will ensure recession.


Here is where it gets interesting, because on the demand side of the equation, per my hypothesis, the "SUV lifestyle" should be coming to an end:

"Oversized SUVs driving to the shopping mall or 50 miles away to soccer practice, will be a thing of the past. High fixed costs of production won't mix well with collapsed purchasing power"

But it turns out that very few people got that memo. Because light truck sales are now at record extremes relative to passenger car sales and Ford just announced they are no longer going to make cars, aside from a few token models.

Below we see that the ratio of light trucks (SUVs/pickups relative to cars) is off the charts: 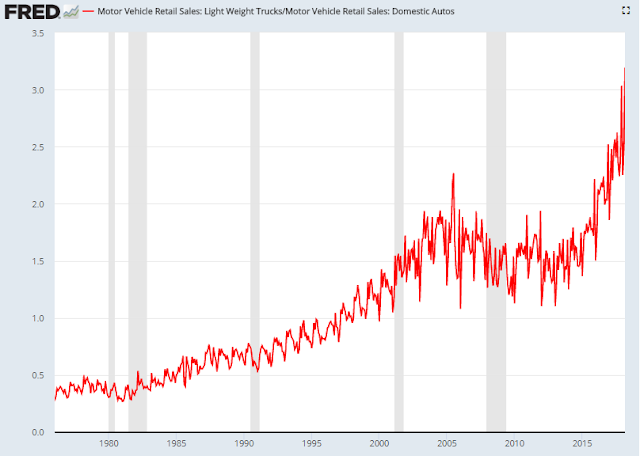 This demand-side phenomenon of forgetting the recent past is important because it has served to increase the demand side price sensitivity (elasticity) to small changes in oil.

In other words the price threshold for what is defined as "pain at the pump" keeps going lower:

"People forget very, very quickly," Kloza said, noting that the average U.S. gasoline price remains well below the $3.60 per gallon it was five years ago."


Indeed, people forget how quickly this all ends.

"SINGAPORE: Oil prices dipped on Thursday, weighed down by swelling US crude inventories and record weekly US production that is countering efforts by producer group OPEC to cut supplies and prop up prices."

“The (EIA) report showed a much larger than expected crude build for last week as well as an unexpected build in gasoline inventories,”

Put it all together, what do you get? Peak supply AND demand occurring at a much lower price level: 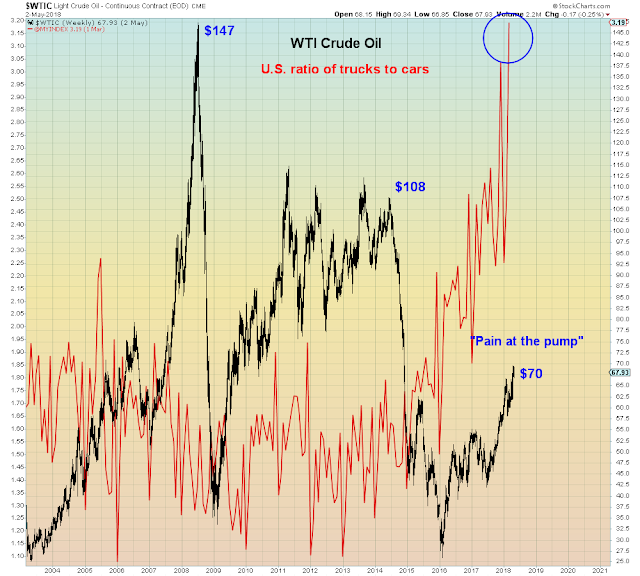 "The pain among smaller lenders has parallels with the subprime mortgage crisis last decade, when the demise of finance companies like Ownit Mortgage and Sebring Capital Partners were a harbinger that bigger losses for the financial system were coming. In both cases, rising interest rates helped trigger more loan losses."

Ford Motor posted a 4.7-percent decline in sales, with retail sales to consumers down 2.6 percent. The No. 2 U.S. automaker said sales of its popular pickup trucks were up 0.9 percent, but SUV and passenger car sales were down 4.6 percent and 15 percent respectively."

"Ford is hoping to persuade its American customers of the charms of modestly sized European vehicles such as the Fiesta, the Focus and the Transit van as it struggles to find a way to reverse plummeting sales of its gas-guzzling range of larger US vehicles."