Slowly at first, then all at once

This latent disaster has conned all but a handful of people. Ok, you and me. The media are back to discussing Malaysian airliners, Wall Street has its head in the feed bag; and the comfort-seeking masses always look away when they're bent over the log
In summary, the economy is slowing sharply, Europe is self-imploding (yes, again), small caps are tanking, recession stocks are rolling over, bonds are rallying and the Dow Jones Illusional Average is now held aloft by layoff announcements from Wintel. Willy Gates wants to monetize his shiteware while there are still morons willing to spend five minutes re-booting. Too much truth for one day? There's an app for that, it's called "CNN"...

The smart money has already left the building
Collapse always begins with the smart money cashing out while the masses are left holding the bag at the top. Oh wait, looks like it already happened

Economic DEFLATION is pushing bond yields lower
Starting this collapse from a much lower level in terms of bond yield, indicating the extent of economic damage already incurred. The disconnect with stocks is staggering especially compared to 2008: 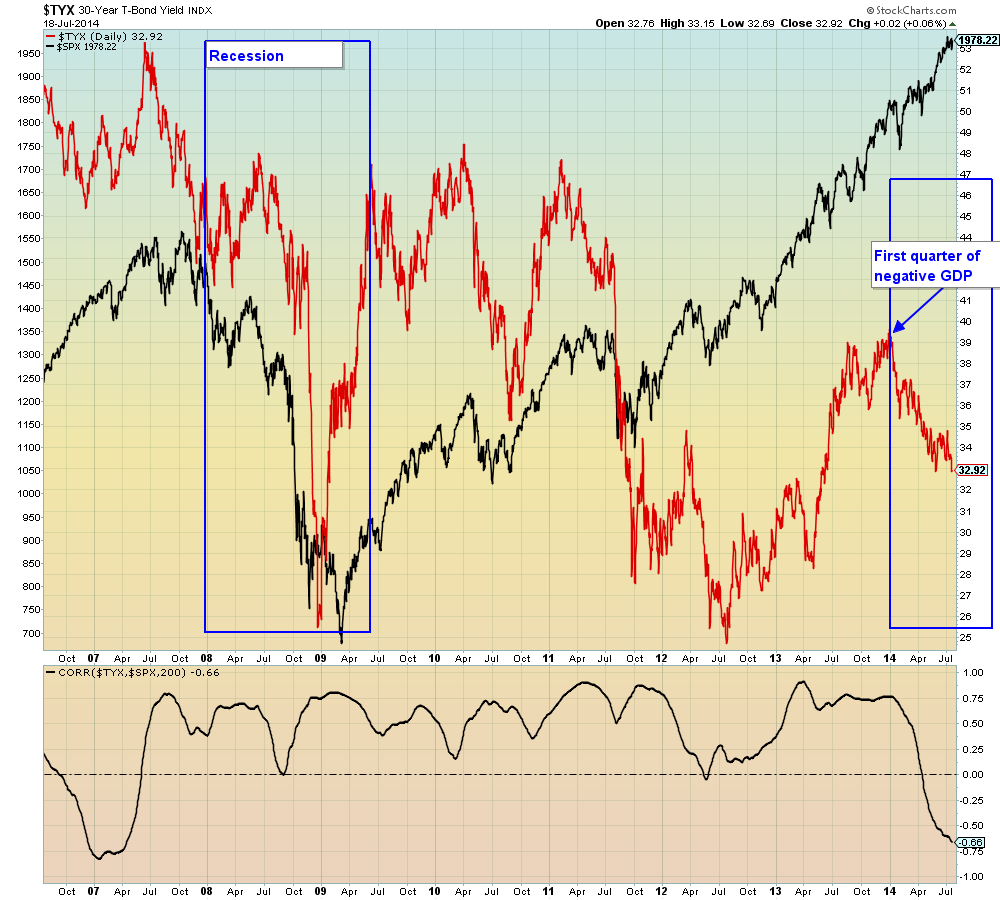 Dow close-up
The mother of all rising wedges
The Dow made a new high yesterday, unconfirmed by all other major indices. The S&P high was back on July 3rd 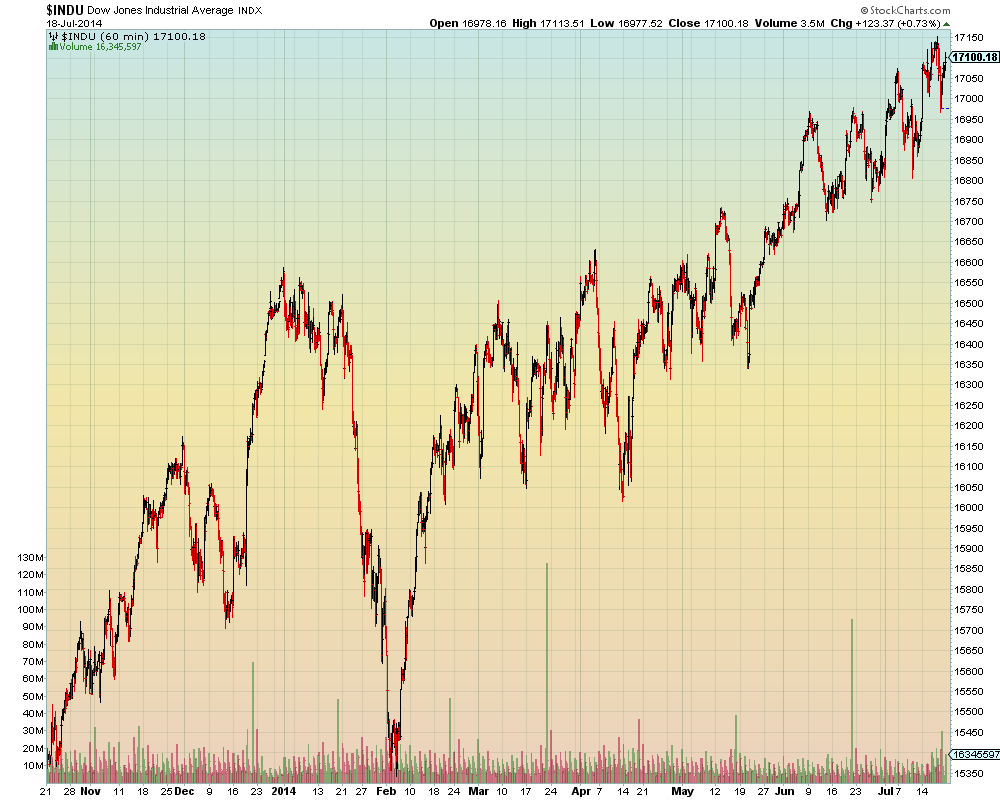 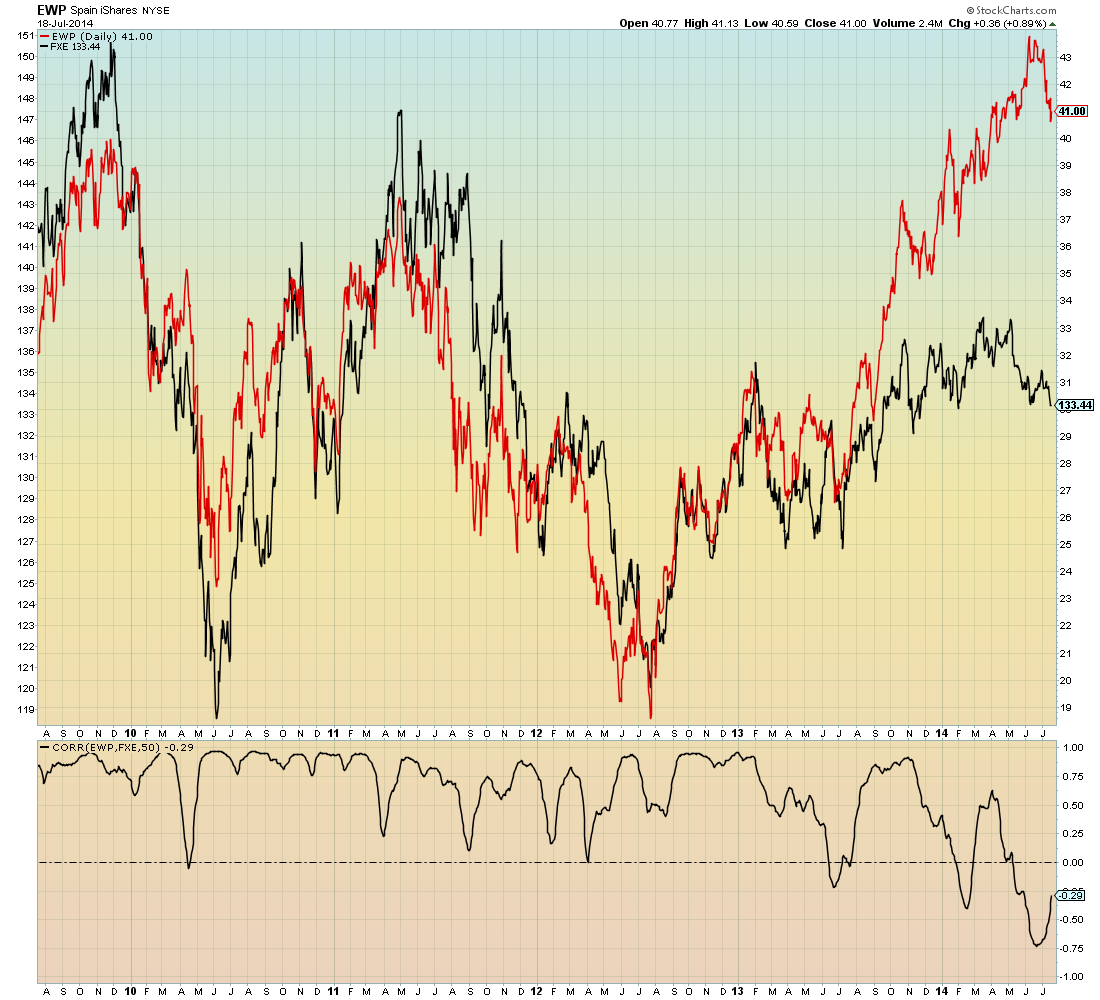 "Epic Disaster"
Everyone was too busy talking about Malaysian airliners in the Ukraine to realize that the U.S. housing market had its biggest drop since Lehman 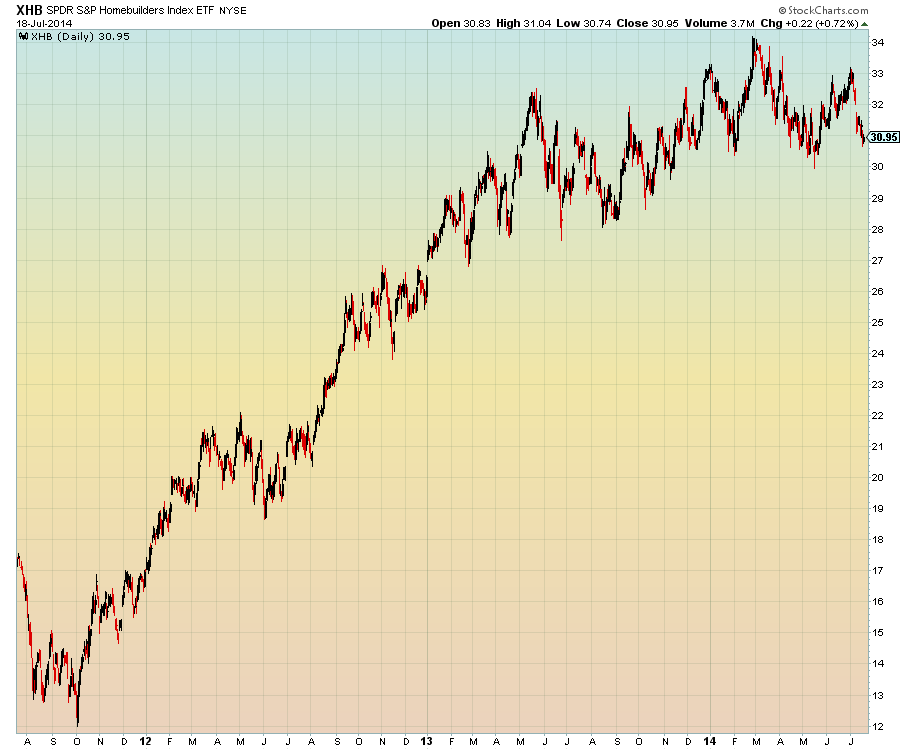 What's wrong with Junk? Is that a dumb question?
Apparently companies issuing bonds to buy their own stock has some sort of limit, although it's been working for IBM for two years straight 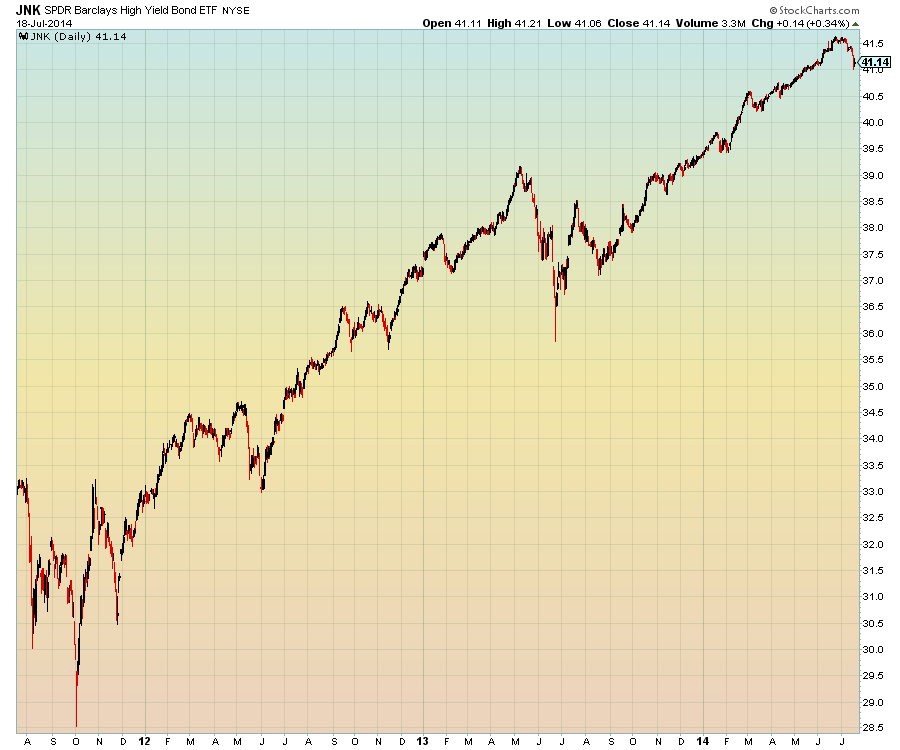 The Twilight Zone Trade
The two leading stocks this week were Wintel. You know, those two rocks tied together to see if they'll float. Of course Microshaft was up because they are going to lay off 18,000 employees "to clean up the mess from Steve Ballmer" who ran the company into the nowhere and made himself a multi-billionaire doing it. He made $700 million just from announcing his own retirement i.e. because the stock jumped. You can't make this shit up.

Yes, you should take this as a sign of the end of the world as we know it. Which stock is which? Who gives a fuck? 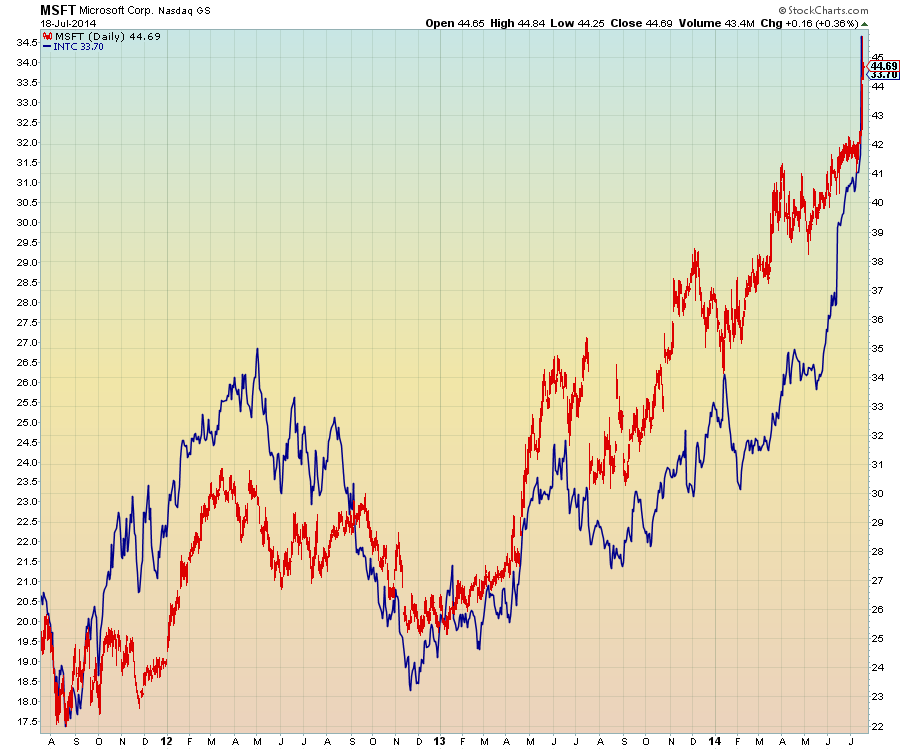 The other sign...
The ultimate recession safe haven J&J is finally rolling over
What stock to buy in a slowing economy when the recession stocks are already rolling over?
That would be what is known as a treasury "bond" 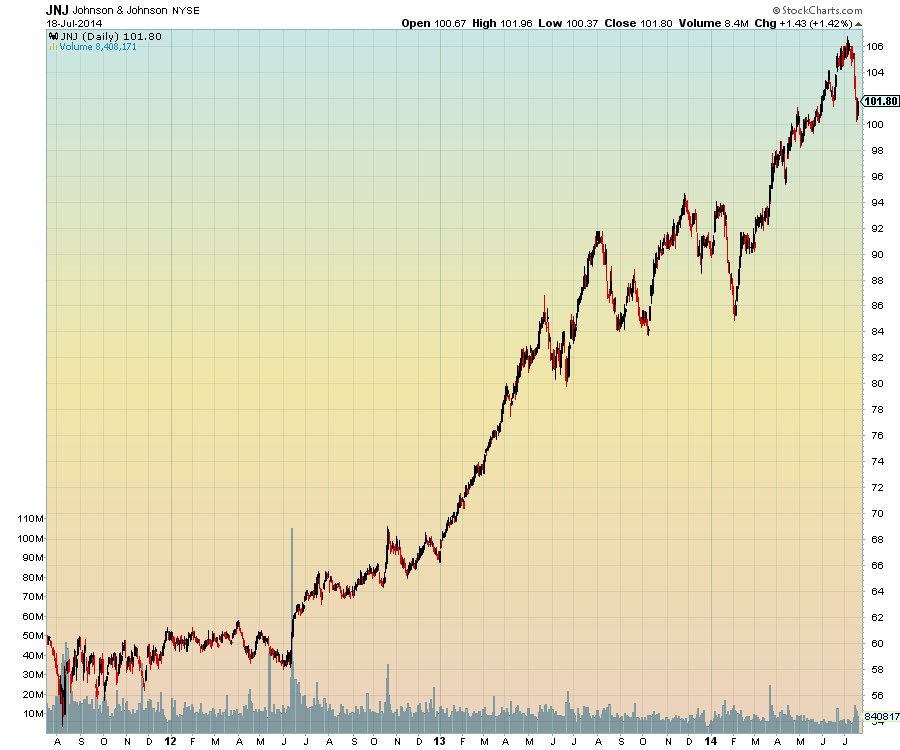 Chart of the week
Do that to me one more time. Five times is never enough...
Nasdaq with %of stocks above 200 DMA (correlation, bottom pane) 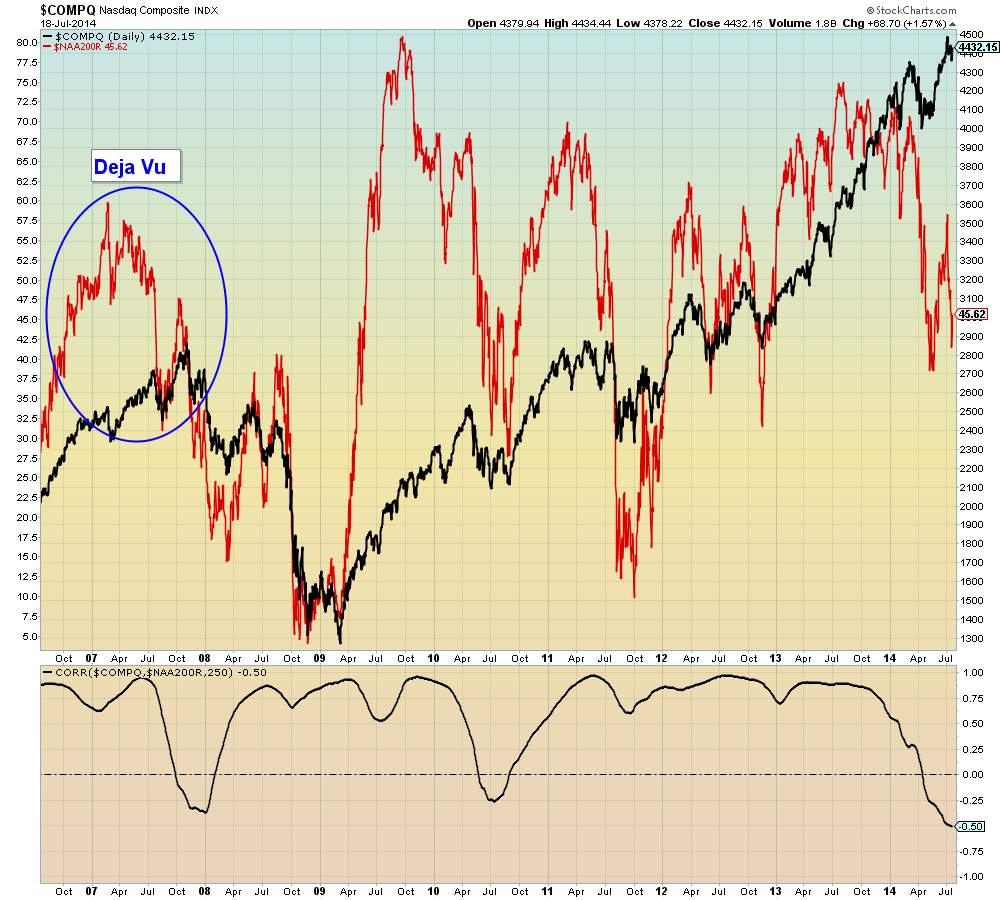 Other than that, it was business as usual, all lies, delusion and bullshit. So, BTFATH