Frat boys outsourced the economy, now they spend every day looking for it

Once again, pseudo-economic GDP has gone missing for the second quarter ending June 30th. Don't worry though, because the "economy is in great shape, we just don't believe it". You can't make this shit up...

[Updated March 31st, 2014]
Fed Chairwoman Yellen pleased markets today by saying that Fed dopium was here to stay.
"The Federal Reserve will continue to bolster the U.S. economy"
"the Fed's "extraordinary commitment," in the form of massive bond-buying and ultra-low interest rates, is "still needed, and will be for some time."

Bolster the economy? Give me a fucking break. Let's look at what is really being bolstered.

Total Non-farm payrolls (aka. Jobs)
$7 trillion in new Federal debt and $3 trillion in Fed stimulus and yet jobs are STILL not back to 2008 levels. The jobs that were created cost over a million dollars each: 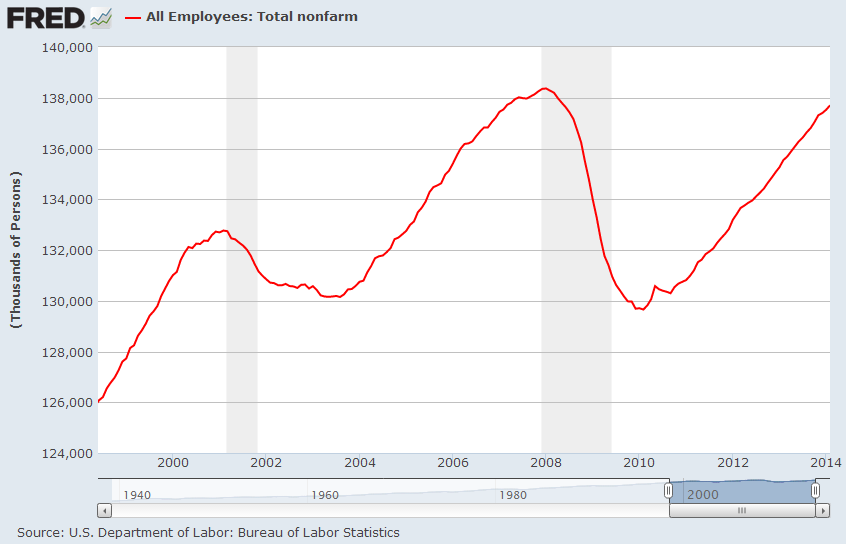 Even more ludicrous
Total jobs divided by U.S. population
What a fucking joke: 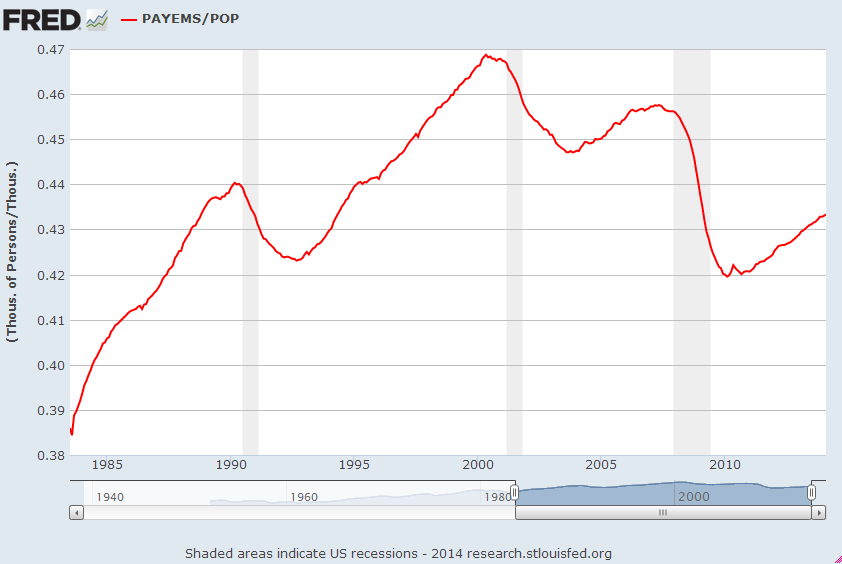 And of course, Dow Casino with Fed Dopium 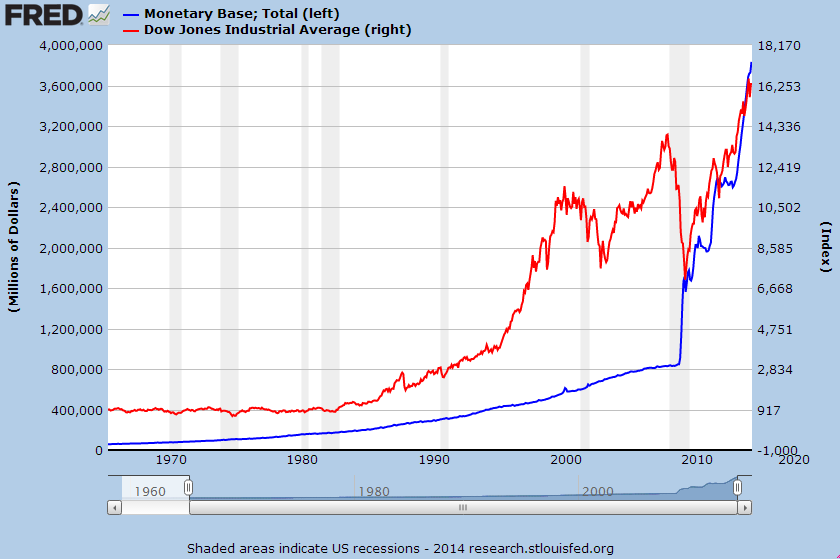 ECRI
Failure to Launch [Feb. 8, 2014]
American Exceptionalism [Jan. 22, 2014]
"For the fifth straight year, expectations are running high that this time around the U.S. economy will take off and reach “escape velocity.”"

"Taking the longer view, there is a pressing need for an adult conversation about what is going on with U.S. economic growth, instead of refusing to acknowledge the problem. The reality is that major structural changes are occurring in developed countries..." 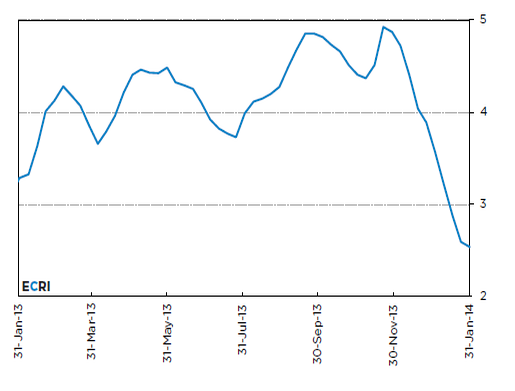 THE ADULTS HAVE LEFT THE BUILDING

[Updated: February 28th, 2014]
Janet Yellen talked the S&P 500 up to a new all time closing high today in her first Senate hearing as Chairwoman of the Federal Reserve. The Dow has yet to take out its high from December 31st, two months ago.

"Fuck You Jack, I'm Ok:"
It was only a matter of time before selfish pricks decided they will stop tipping if the minimum wage is raised.
i.e. the real-time meltdown of the "everyone for themselves" historical experiment continues unabated. Class warfare in the U.S. now consists of everyone at the bottom of the ladder stabbing each other in the back while billionaires laugh from their penthouse, collecting their Fed-inflated trillions. We live in a fucking refugee camp.

What, if anything, will be left of the real economy by the time all of this chicanery ends is the real question

CNBS:
Is the U.S. In Big Trouble? We're about to find out

Key Proponents of Outsourcing (aka. CFOs) Fear "Consumer Slump"
(The myth of the jobless "consumer" continues")

[Updated: February 18th, 2014]
Today, the Idiocracy decided to stop looking for the economy, because it no longer matters.

The Economy Doesn't Matter Theme:
IBD told us today (Big Picture, 2/14), that the Nasdaq launched to a new all time high
"The IBD 50 was the star of the day Tuesday, rising 1.8%"
however...
"The National Association of Home Builders/Wells Fargo builder sentiment index came in at 46 in February from 56 in January, well below expectations"

"The New York Fed's Empire State Manufacturing index came in at 4.5 vs. 12.5 in January. Economists were looking for 8.5."
Actually...
Home builder sentiment didn't just fall it had its biggest drop in history, since 1985

[Original Post]
It's been five years since the depths of the "great recession" and yet to the continuing shock and dismay of economists, the economy has yet to float back from China. Each "recovery" over the past thirty years has been weaker than the last, requiring ever-more fiscal debt and monetary stimulus, to the benefit of an ever-dwindling minority; however, economists remain confident that the real economy will "appear" any moment.

Therefore, the only question on the table right now is what will come first:
a) Widespread acknowledgement that the reason the economy isn't improving is because it has been shipped to China

or
b) Total financial collapse

You know which way I am betting, but let's consider each scenario in turn:

Scenario A:
Let's say hypothetically, that the stewed masses magically awaken from their narcoleptic food coma and suddenly realize that they've been lied to for 5, 10, 30 years straight. It's not hard to imagine that the underwear would be mighty stained at that juncture, hence inadvertently leading to Scenario B - total meltdown. I don't know what could cause that sort of awakening, perhaps the cancellation of the Kardashians or a slight interval between sports seasons.

Scenario B:
Alternatively, let's say that for example the Japanese realize that they are counterparties to their own debts, hence their historically massive liabilities and "assets" net out to zero. They are bankrupt. Or, let's say that global billionaires realize that the vast majority of their wealth is invested in uncollateralized IOUs, backed by the full faith and credit of lying politicians and angry mobs. Alternatively, massively leveraged carry-trade investors in Emerging Market debt might realize that they are the sole source of funding for over-indebted sovereigns and if they don't keep buying bonds then those markets will crash. That too would lead directly to scenario B.

Beware of rampaging Kardashian watchers:
Suffice to say, if scenario B plays out first, it won't take too much of a break from reality TV for the Idiocracy to come around to scenario A. At which point, I highly recommend a "shelter in place" strategy, as the Idiocracy at large vents its newfound rage at the "powers that be" and other assorted icons of wealth and power. That rage will eventually burn itself out, however, there is no telling what mayhem will ensue in the interim. PDAs - Public Displays of Anarchy should be assiduously avoided for anyone who doesn't want to become part of the Faux News reality show manhunt. Remember, anarchy is spectacle to the Idiocracy, and you don't want to become the next "Running Man".

The point of this exercise is to monitor the progress of the Idiocracy towards either/or scenario A and B, as we wait for those eventualities to occur.

I call this game "Dude, where's the economy?"

[February 17, 2014]
The Economy Is in a Fog Bank Theory
This current delusion states that the economy is in a temporary fog bank, providing limited economic visibility, however, the Golden Gate bridge should be visible any moment now. Both December and January's bad economic figures were blamed on bad weather, which makes sense until we learned that internet sales dropped more than any other retail segment. Apparently Amazon's customers are lost in the fog as well, not to be confused with the "cloud".

The "Consumer" is Crumbling Theory
First off, this term "consumer" is of course a text book fiction created by the soon-to-be-bankrupt economics profession. This is the ceteris paribus fantasy that the economy is made up of independently wealthy individuals whose incomes are in no way tied back to the jobs market. For example, when jobs are outsourced to China, "consumers" benefit from lower prices. When all of the jobs are outsourced to China, then "all of the consumers" benefit.

So, going back to this nascent "consumer crumbling" theory, in the real world, that would be described as the "unemployed wage earner" is crumbling, reality. As in people have no fucking jobs or jobs paying half their normal pay, so they can no longer spend as much.

Overall, I rank the Idiocracy's progress towards scenario A this week, as "getting warmer" (and scenario B of course is never more than a large block futures trade away).