The Promise of the Joker and the Fool

Blogs like this one are a total fucking waste of time. We are a handful of hardcore realists reading each others' blogs and reinforcing what we already know. All while the stoned masses sit at home fat and happy watching the Kardashians, hypnotized by Dow Casino ticking higher with every passing day. After 2008, the comfort-seekers at large curled up into the fetal position and have remained that way ever since. Regardless, how can we possibly warn the oblivious masses about today's economic risks when it's all doomed to collapse under the weight of its own moral depravity? Basic logic dictates that the majority can't all get out of a house of cards intact. The Idiocracy at large is totally bought in and sold out to the promise of the jokers and fools who run this globalized catastrophe, you know, the same ones who collapsed it the last time...

There is nothing any bearish blogger can do to bring about the collapse of this fabrication that global thought dealers are not already doing. They collapsed world markets in 2008 and they are fully capable of doing it again all on their own. These people went to the top schools in the U.S., the UK, Canada - across the world. They know what they are doing. They generated the 2008 clusterfuck, profited from it, and now are guiding us straight ahead to the next catastrophe. Who was at the helm of the Federal Reserve in 2006, 2007 and 2008?  Bernankenstein of course. And who until this very month has steadfastly been Wall Street's largest leveraged banker? Bernankenstein. He saved us from a catastrophe that he himself subsidized. Soon he will hand over the reins to Janet Yellen, who has degrees from Yale and Brown, two more Ivy Leagues. Surely she can finish the job and pile drive this fucker straight into the ground. Yellen admits that she didn't see the 2008 financial crisis coming - apparently giving subprime loans to illegal immigrants and watching Goldman invent the self-imploding CDO didn't raise any alarm bells with her. So she is definitely the right person to finish the job. Speaking of which, the self-imploding CDO that took out AIG and Lehman was invented at Goldman Sachs under current chairman Loyd Blankfein (see: Ayn Rand Gone Wild), who was Harvard roommate to the Bennie Bernank. Fortunately Goldman was bailed out by that other Harvard/Goldman alum Hank Paulson as Treasury Secretary (and Bernanke). The Credit Default Swap (CDS) was invented by JP Morgan/Cambridge superstar Blythe Masters who was just let go from JPM for her alleged role in an energy market manipulation scheme a la Enron. The CDS may well be the ultimate financial weapon of mass destruction (WMD) - still out there working its magic. Meanwhile, Central Bankster Mark Carney, another Harvard/Goldman Sachs alum, just finished inflating Canada's massive real estate bubble and has now moved to the UK to help top off their real estate bubble. And if only Larry Summers, Dean of Harvard, had been picked as Fed chairman, surely this clusterfuck would already have collapsed by now. It was Summers who suggested just last year that the secret to improving a nation's credit rating was to borrow more not less. Genius ! Summers also of course was a key proponent of repealing Glass-Steagall, the Depression-era law meant to preclude another financial crisis. The other key proponent behind Glass-Steagall repeal was Robert Rubin (Goldman/Citigroup/Yale/Harvard). Obama/Bush, two more Harvard frat boys gleefully sowing the seeds of anarchy. This is all well in hand. Clearly, we need to sit back and wait. There is nothing we can do to end this shit show that the dumbfucks from Harvard and other Ivy League schools are not doing on their own. No offense, but I highly doubt if anyone reading this blog could collapse the world financial system - I doubt if I could. So the longer we doom forecasters warn of risks and otherwise prescribe caution, the longer this circus will continue. Think about it. Harvard dunces will end this globalized catastrophe once and for all. We just need to be a bit more patient and give them time to work.

Bernanke fixed Wall Street by giving them $3 trillion to play with... 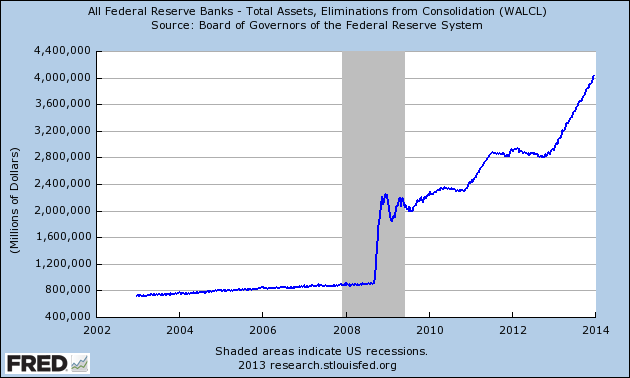 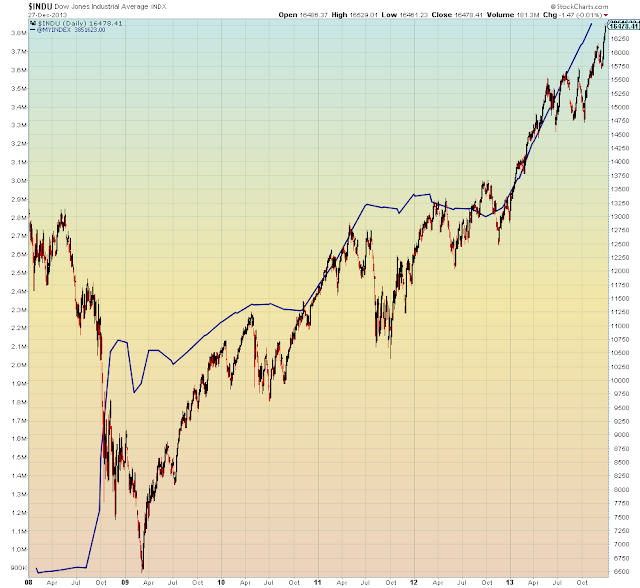 Apparently we're still waiting for the melt-up to occur. Sure, whatever... 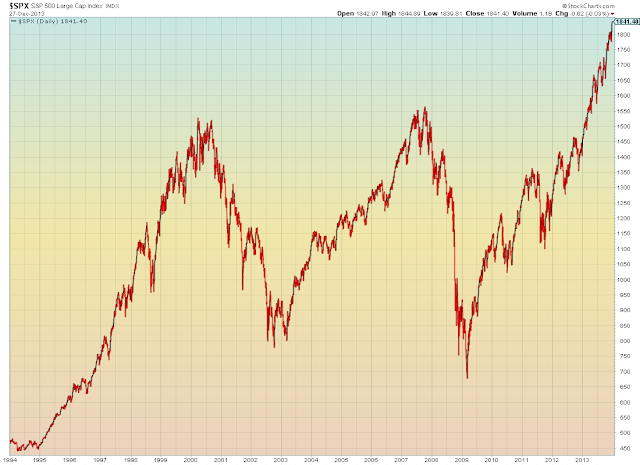 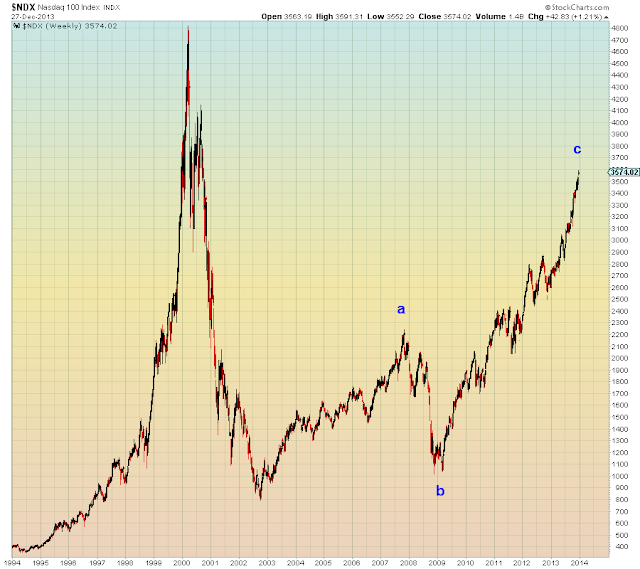 And Priceline (Nasdaq in background)
Top performing S&P stock - Up 2200% in five years
Are we in a bubble? I can't tell. Although the last time this stock went parabolic I lost a shit ton of money shortly thereafter that's all I know. It's a good thing I'm not bitter, especially towards Central Banksters and their continued market manipulations... 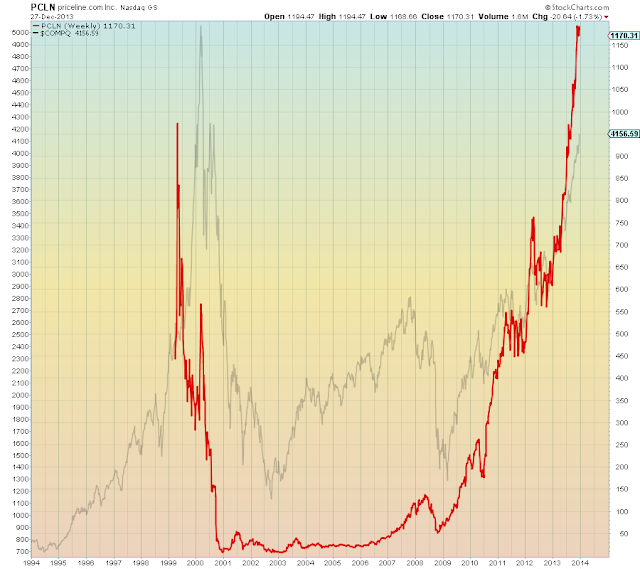 IPO Casino
Twitter (below) priced at $26 and recently traded at $75 for a 200% gain in 6 weeks. Its price to sales ratio is a ludicrous 75. Apple's price/sales ratio is 3. Twitter's profit margin is -25% so it sells dollar bills for 75 cents and yet its market cap is greater than that of 80% of S&P companies. It's the most overvalued piece of shit on the entire planet.

Meanwhile, per IBD on Friday, "Investor's Intelligence (sentiment) bulls v.s. bears ratio is in the silly zone" That's because there are no bears left except for a handful of bloggers engaged in a mutual admiration circle jerk... 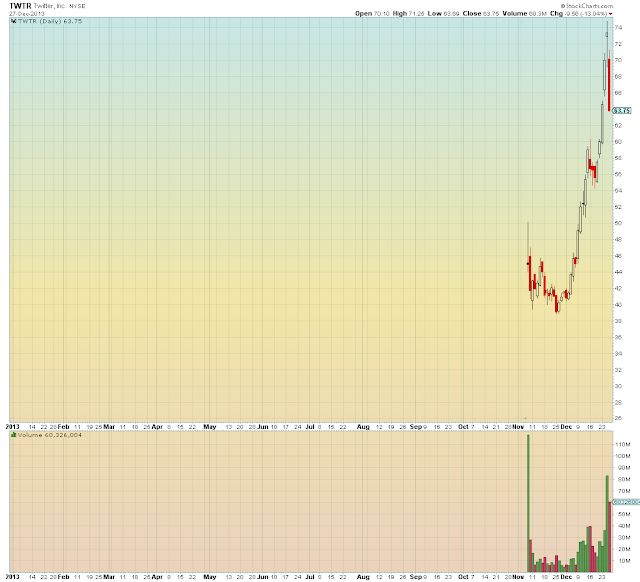 Ode to Ponzi Capitalism and Securitization
In a big FU to customers, BusinessWeek informs us last week that companies with the poorest customer service have outperformed in the stock market. There is actually negative correlation between customer satisfaction and stock performance. Time Warner Cable is the reference company (appearing on the list multiple times); however, Facebook is at the very bottom of the ratings. 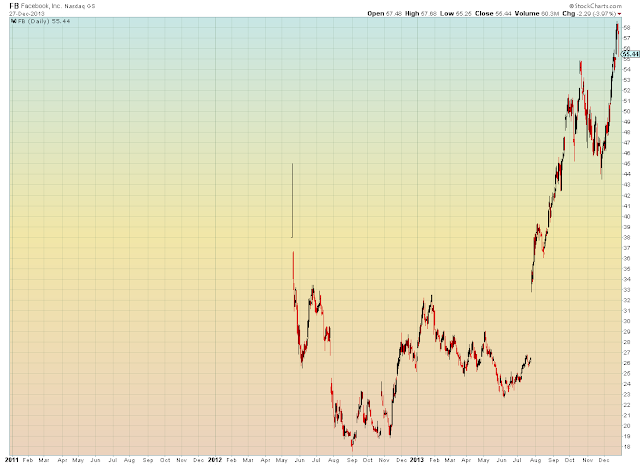