Way back in 1929, no one seemed to notice that commodities had peaked several years earlier. They also didn't pay too much attention to the fact that bonds had peaked a year earlier as well. Stocks continued ploughing ahead on their own as if they could never go down again. Then, seemingly out of the blue, they crashed, losing 90% of their value by 1932... 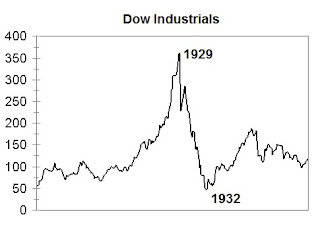 Prechter just published some interesting charts from the 1930s depression that serve as a useful survival guide for determining the logical sequence of events in a deflationary depression:

EWI: Elliot Wave Theorist, July 19th, 2013
First off, if you think that my timing is bad, Prechter's is even worse. His short S&P futures position has been stopped out more times than I can even remember. And of course, he was expecting "The Crash" to begin all the way back in the mid 1990s. I mention his timing record, because I am sure a lot of "bond bears" just got lathered up by his assertion that "bonds" will crash at the same time as stocks. He includes short-term Treasuries and Treasury bills in the "crash" scenario, so that got my attention, since that is my planned safe haven, at least initially.

Going to C(r)ash
The fact that he never tells us where we should put our money during the ensuing mayhem is annoying indeed. He includes some safe haven advice in his book Conquer the Crash, but I didn't find it very useful to someone who doesn't have a Swiss bank account i.e. me. And having some physical cash on hand just makes sense, but I would hope he would agree that withdrawing a 401k retirement at an ATM machine is a bad idea. Therefore we are left to figure out the important parts ourselves. Suffice to say, most people who abuse the term "cash" in the investment setting are referring to money market funds which consist of - yes, t-bills and also commercial paper which is even riskier than t-bills. And as far as bank deposits, most people have yet to fully comprehend the ponzi scheme that is fractional reserve lending, but the term bank run should come to mind. Here in the U.S. the FDIC insurance fund can currently cover about $.0035 cents on the dollar. Yes, you read that right - the target insurance fund balance is 2% and it's currently at .35%. Thanks to the events of 2008, the reserve fund won't be back at its 2% target until 2018, which would still be a total joke i.e. to assume that loan losses in aggregate would never exceed 2%.

So we need to figure out how to thread the needle...

Commodities Peaked First
Ok, I don't have the charts Prechter's charts from the 1930s or license to print them, so I will describe them to those who don't subscribe to Elliot Wave (International) - literally or figuratively. First off, he shows that commodities peaked ahead of all other asset markets in the U.S. That's exactly what has happened in this cycle. Commodities peaked in 2007, made another peak in 2011 and are currently going sideways 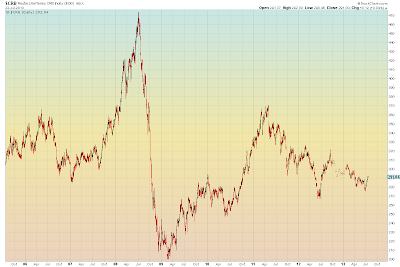 Bonds "Peaked" Next
Unfortunately he never fully differentiates treasury bonds from most other types of bonds so that requires us to make some differentiation. To assume that a t-bill will trade like a municipal bond, would be amateur. He does say that junk bonds and the like will go to zero, which is not too difficult to believe, given the name. So to be more exact, from this point forward when I say bonds, I mean Treasury bonds and bills. And also as far as duration, we can assume shorter-term bonds will be less volatile than longer-term bonds - another key factor that the EWI charts did not differentiate. When Prechter says bonds "crashed", he shows a composite index of all bonds that lost 30% between 1929 and 1932. Compare that to stocks that lost 90% in the same period and commodities that lost 80% from high to low.

In the 1930s bonds didn't crash until three years after stocks...
Prechter's own charts show that while bonds peaked prior to stocks and started to lose their value, they didn't lose the majority of their value until three years later in one big drop. Stocks on the other hand, as we know, essentially went straight up into 1929 peaking after all other asset classes, and then promptly crashed in that same year. Then they recovered somewhat in 1930 making everyone believe the worst was over, and then rolled over into the abyss during 1931. Bonds however, held most of their value until early 1932 at which point they dropped 25% very quickly. More on that below, since it's tied to the dollar. Again, I am referring to treasury bonds. I assume riskier bonds will follow the path similar to stocks.

This is not the 1930s...
One point Prechter makes in passing is that the magnitude of unsecured financial assets today dwarfs what obtained in the 1930s. I assume he is referring to the various leveraged derivatives which if they were unwound would produce history's largest virtual bank run. To this point, ZH recently showed that were such a virtual bank run to occur, that the shortage of "quality collateral" is on the order of $11 trillion. Again, as I said recently, one more near term support for t-bonds.

What about the dollar and gold?
Ok, so that takes care of bonds. Even for those who want to interpret Prechter's missive in the most bond bearish way possible, in the 1930s, it was a 30% crash occuring three years after stocks. The real question is, what happened to the dollar and gold during that time, something that Prechter didn't show.

Dollar debasement - gold revaluation and confiscation...
By 1933 (or likely earlier - coinciding with the collapse in bonds), a run on gold had started which was a de facto devaluation of the U.S. dollar. Since the price of gold was fixed in dollars, we have no way of knowing the true price of gold. That same year, FDR outlawed the ownership of gold by private citizens. Gold was confiscated. A year later, the dollar was officially devalued by 41% in 1934 under the Gold Reserve Act i.e. the price of gold was increased from $21 to $35 per ounce.

Gold is the ultimate safe haven
Again, for me the key takeaway is that the run on gold happened after the markets crashed and deflation had set in. We also know that the gold standard was a constraint on monetary expansion so the only way to expand the money supply was to confiscate gold and/or devalue the dollar - both of which actions were taken. This is all very consistent with the hypothesis that the current set of policy-makers will eventually print currency and generate hyperinflation or at least a high level of inflation to get the economy moving again. So gold indeed is the ultimate safe haven.

Why Not Buy Gold Now?
As we know, these are early days in the sequence of things and right now gold is the worst performing asset class. Currently it's trading like a speculative instrument and not a safe haven from physical money printing. Therefore, we have plenty of time to buy gold, and I for one won't buy any until the last hedge fund has puked it back into the market, which could take a while... 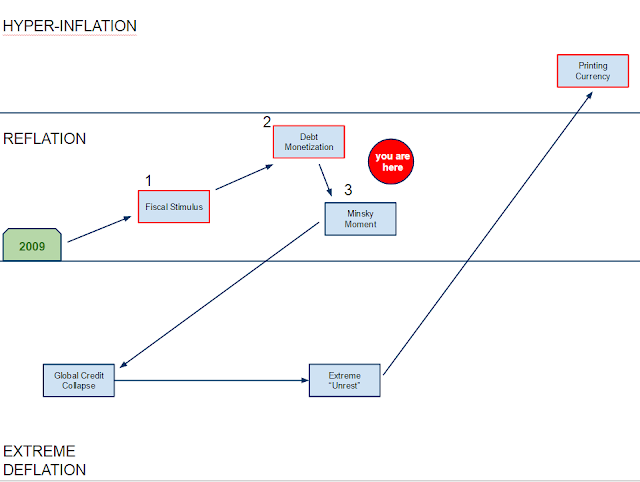 Other posts on this subject:
http://ponziworld.blogspot.com/2013/01/deflation-least-considered-most-likely.html