Jobless "consumers" can't maintain a developed world standard of living while competing against Third World wages. The overriding theme of the past three decades.

Therefore once again, Fed Dopium dealers are cutting liquidity to their asset bubble, while the economy is still outsourced to China

Back in 2007, the real estate market was flattened by the last round of this serial buffoonery, so when it didn't recover this time around, no one really noticed.

Also in 2007, agricultural commodities peaked, tanked and continued to deflate, but again no one really noticed

Then gold had a blow-off spike in 2011, and subsequently couldn't muster even a meager rally, but no one really noticed. Gold bugs kept telling us that hyper-inflation is right around the corner. Not this corner, the next corner.

Copper also peaked in 2011 and went down in a straight line afterwards, but no one really noticed.

Oil peaked in 2007 and subsequently languished, but no one seemed to notice.

Municipal bonds peaked in late 2012, but apparently that was of no concern

Then Small cap stocks topped out and began to underperform, but again, few took notice.

Then European stocks rolled over, but again no big deal.

Running up the credit cards for a "recovery"
Throughout this entire period, Econo-dunces congratulated themselves on their debt-sponsored pseudo-recovery which cost $40 trillion in new debt worldwide and in the U.S. doubled the debt, as each new job cost $1 million in new borrowings. Half of the jobs created since 2008 were part-time low paying jobs. Take home pay shrank for five years straight.

STILL, FEW IF ANY REALIZED THAT THERE WAS ONLY ONE PERSISTENT THEME DURING THIS ENTIRE ERA THAT CUT ACROSS ALL ASSET CLASSES:

RELENTLESS (IMPORTED) DEFLATION
Cutting through 35 Years of lies, bullshit and self-delusion. Only one constant theme as expressed by Long-term Treasury yields 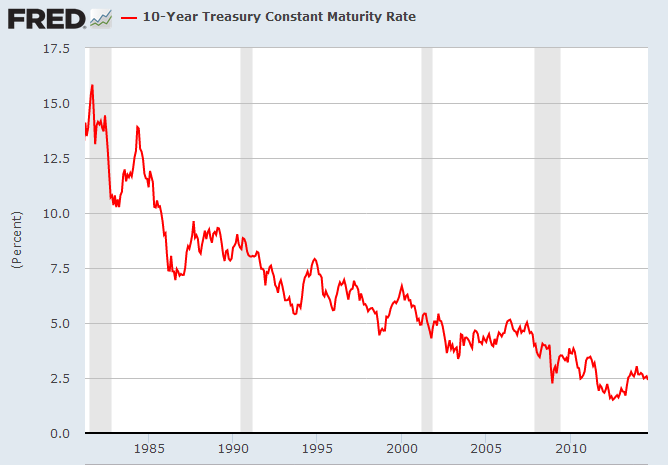