Life without Third World exploitation is too horrible to even contemplate
For five years straight, Central Bank liquidity has papered over ever-growing borrower insolvency. Now liquidity is receding. No one wants to even contemplate how this is all going to end. So no one does. 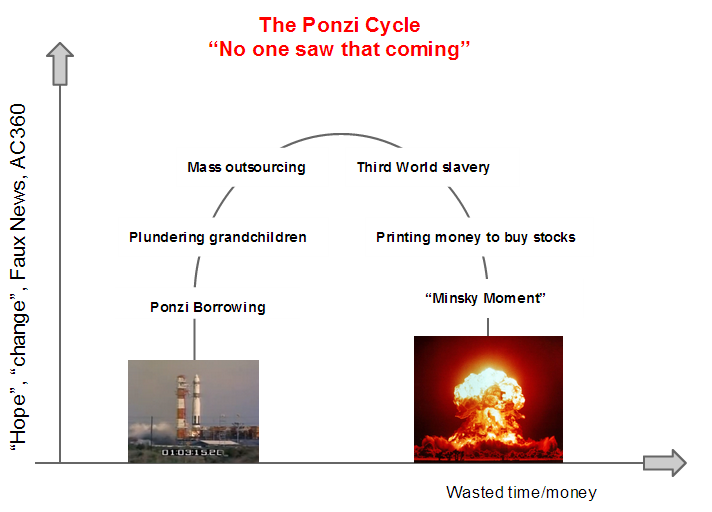 Doublespeak: 2 + 2 = 5
"What is really important in the world of doublespeak is the ability to lie, whether knowingly or unconsciously, and to get away with it; and the ability to use lies and choose and shape facts selectively, blocking out those that don’t fit an agenda or program"

Alarm Bells In Europe [Aug. 2nd, 2014]
"Private sector lending is dropping sharply in the Eurozone"
"Espirito Santo reported the largest ever corporate loss in the country’s history just last Wednesday"
"European banks have loaned in excess of $3 trillion to emerging markets – a little less than the entire GDP of Germany"
“A handful of large EU banks are materially exposed to more fragile emerging markets.”
"The least well-capitalized banking sector among the larger Eurozone countries is not the Spanish or Italian… but the German, closely followed by the French"
"Spanish, Italian and Portuguese banks increased their holdings of domestic sovereign debt by very significant double digits, mostly financed by the ECB"
"Sovereign debt has reached 90% of GDP (from 65% in 2008), the highest level ever"

For decades now, the Globalized Ponzi economy has grown unchecked to now become the sacred status quo aka. the consumption-oriented lifestyle. All aspects of the Ponzi economy are now fully correlated at 100%. Russian sanctions boomerang straight back at Multinational corporations. Every single economic decision is a zero sum game between haves and have nots.

Relentless profit growth is vital to avoiding asset deflation and Ponzi collapse.
In order for a Ponzi scheme to grow it must continually attract more "adherents" i.e. fools. More low wage immigration. More Third World countries switching from Socialism to Ponzi Capitalism. New countries willing to buy a lottery ticket to see which one will win a seat at the big table. Leave alone the fact that no developing country in the past twenty years has been able to achieve anywhere near G7 levels of GDP, despite historically enormous transfers of industry, jobs and intellectual property.

"The Next Contestant on the Price is Right"
And the quality of leadership has been forced to decline in a commensurate linear fashion. Each subsequent generation of buffoons increasingly mathematically challenged so as to extrapolate the ever-more impossible into the indefinite future. All ignoring the direction of economic progress and instead focusing on how to raise as much debt as possible across every sector of the economy. They don't inherently assume debt is "bad", because they were raised to be all-knowing over-confident buffoons making it all up as they go. A debt-based economy is all they've ever known. Today's game show hosts in leadership grew up in the longest economic expansion in human history, and the most remunerative without any comparison. The age of digital alchemy. Computers combined with derivative contracts have created notional "values" in the hundreds of trillions. Amounts inconceivable even 30 years ago.

The future has already been planned; conveniently assuming full exploitation
And you need not expect anyone you meet to believe that the status quo will ever end. They're not the least bit capable of believing it. This has nothing to do with facts and data. This is solely about people's inability to accept that the consumption oriented lifestyle is ending. They are programmed to believe in more, not less. Forget about the 2008 wake up call, I assure you that they already have. Forget that the global economy is deteriorating in real-time. Forget that global debt has grown 40% since 2008. Forget about ghost cities in China, Third World factory exploitation, record wealth inequality, 0% interest rates forever, printing money to buy stocks, mass outsourcing, sovereign ponzi bonds, falsified unemployment data, political incompetence, growing geopolitical unrest. Charts, facts and reality play no part in this fantasy delusion. The average zombie, burned out on their rat race to nowhere, has literally no capacity to even contemplate the end of the status quo. They are well programmed to only believe in more, never less.

A Collapse to Call Our Own
Ponzi schemes collapse from the bottom up, and this one is well into decay. The billionaires telling us every day that inequality is declining will be the last to know that this is all ending. The Kardashian and ESPN watchers, some time after that. But for the people at the bottom of this entire shit show, the crushing weight of zero sum wage oppression and relentless profit extraction has kept them pinned down for decades now. Each U.S. expansion since WWII has been weaker and weaker than the last. Now, Fed Governors are already discussing interest rate hikes, despite the fact that the jobs and incomes deficit generated during the last recession is still on full display. Those at the top of this clusterfuck are fat and happy, so they don't even question the madness. Three million new part-time McJobs where there used to be real jobs just six years ago? Who gives a fuck? What's the Dow at? And why do we need Obamacare, I have healthcare. Seems like a waste of money.

We're now at that point in time where it's so fucking blatantly obvious that the Ponzi Model is approaching the brick wall of reality, that it's disingenuous to even raise the topic. We live in a generation that is wholly incapable of conceiving life beyond the consumption oriented status quo. It's inconceivable to the point where most people deem it the "unthinkable"scenario. And hence they don't think about it.

And still they'll all say, "No one saw that coming".