The top 1% of Americans have twice as much wealth as the bottom 80%. 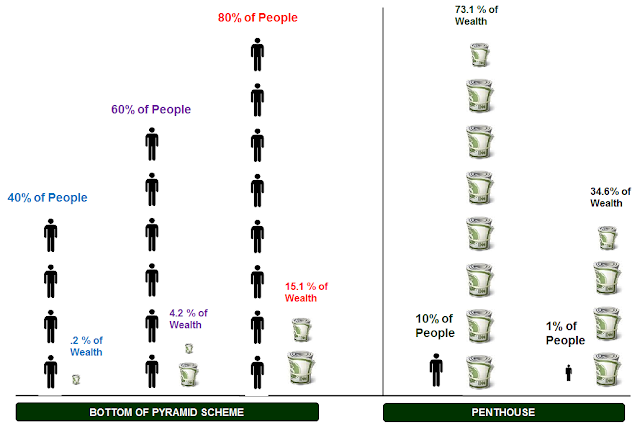 In my last post I asserted that the U.S. "Ownership Society" is actually just a (not so) cleverly disguised lottery.  In this post, I wanted to show graphically what I mean.  So, I took this pie chart wealth distribution data and turned it into the percentiled chart that you see above.  On the left, the bottom percentiles, on the right are the top percentiles by population.

Shhh, don't tell anyone, it's a secret
Being a lottery, the key for the various policy-makers, media spin-masters and corporate slave masters who keep this shit rig together, is to constantly brainwash the wage enslaved masses that they too can one day join the 10% or 5% or 1% of Americans who actually have (all of the) positive net worth.  Because when the day comes that people decide that there is no chance they can "win" and therefore it's no longer worth playing, well then the game will end, most abruptly.  More to the point, recent studies show that "socialist" countries such as Canada and many across Western Europe, now enjoy more upward mobility than the U.S.  And as the article states, the depth of poverty in the U.S. is the distinguishing factor.

No Wealth = Subsistence = 3rd World
As we see, over half the U.S. has zero or negative net worth which implies no buffer against adversity and therefore a subsistence way of life.  As one would expect, due to relentless industrial arbitrage aka. "free trade", a substantial number of Americans are becoming an extension of the Third World only living in the U.S. v.s. overseas.  Bear in mind that these figures are from 2007, so the trend has only worsened in the meantime.  Having no capital or store of wealth means that the current generation has inadequate resources to bootstrap the next generation to a better way of life, ensuring an endless cycle of poverty.

It's Either a Lottery or a Slave Society - I Can't Make Up My Mind
And given that they have no wealth, it should come as no surprise that Mitt Romney's "47%" pay no taxes i.e. you can't get blood from a stone and most of these people work at (multiple) minimum wage jobs or are elderly and worked their entire lives.  These are the people who do the heavy lifting and make businesses run day to day, so that people at the top of the Ponzi Scheme can continue living the dream.  So for the vast majority of people the price of the lottery ticket is 40 years of grueling, unrewarded hard work with nothing at the end to show for it, except some politician telling them they are worthless, literally.

Don't Worry About the Middle Class, There Isn't One
When you add in the Federal Government Debt which equates to ~$50k/person, then 80% of Americans have negative net worth and are technically bankrupt.  Meanwhile the job destroyers who outsoured their way to the top of the wealth pyramid, unfortunately offshored entire industries, making the long awaited jobs recovery a never-ending delusion.

The American Pipe Dream
When you break it down per person it gets even more ludicrous.  Here is a pie chart showing the share of American wealth per person between the 80% and the 1% (i.e. based on the percentages above, it's a 183:1 ratio). 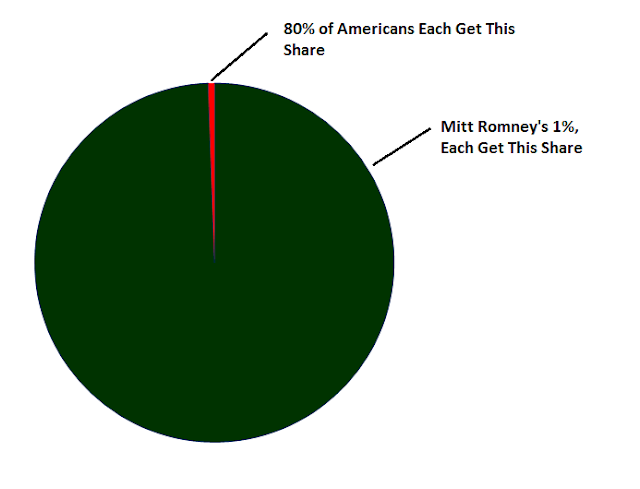 Is this a Great Fucking Lottery, or What?

P.S. Some people say that posts like this are "Class Warfare" and UnAmerican.  Not at all, similar to the winding down war in Afghanistan, I recognize that the class war is well over and the troops are coming home.

Now the real wars can begin.