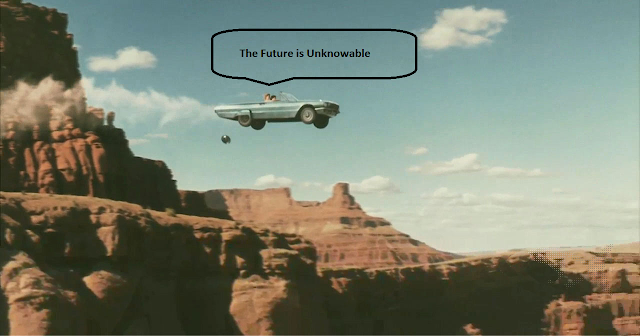 I just read this timely article "The Perils of Overconfidence" in which a Wall Street sophist once again tells us that predicting the future is a fool's errand (scroll down past all the bullshit to the bottom of the article).  Apparently trying to avoid being ass raped by Wall Street for the fifth time in a row, is the *new* overconfidence.  This "no one can predict the future" bullshit is exactly the mentality engendered by "Fooled by Randomness" (aka. the Black Swan Event), as described in the original post below.  I say it's timely, because from a contrarian standpoint, this is also the type of mindset we should expect Wall Street to adopt at a critical juncture when facing overwhelming (and highly obvious) risk.  Let's be clear, Wall Street greedbots have to believe the Black Swan theory in order to keep their eye on the prize, which is the end of year bonus.  That is their overriding incentive, because after all, hedge funds are just call options - heads they win and score a big bonus - tails they underperform the market/crash the fund, and walk away.

For those of us "home gamers", the timeline and incentives are slightly different when it comes to catastrophe avoidance.  My timeline is through retirement, and my incentive is to protect my savings in the event of job loss, and thereby avoid having to feed my kids dog food.

Black Swan Theory = Plausible Deniability = Willful Ignorance = Overconfidence
More importantly, the best investment advice ever given, didn't come from philosopher Bertrand Russell it came from investor William J O'Neil who said (paraphrasing) - the key is not to figure out what is going to happen, the key is to understand what already has happened.  With respect to the illusion-formerly-known-as the economy, it's already off the fucking cliff, supported merely by debt.  And as the latest inconvenient data indicates and the Baltic Dry Index corroborates, the vector is down.  Getting back to the perils of overconfidence, nothing comes close to Wall Street's greed-addled faith that Central Bank liquidity programs can substitute for a self-sustaining economy - forever.  For three years Central Banks have forced the market's Risk On/Off mode to the "On" position - so far, so good.  The operative (and fatal) assumption is that they alone control the switch...

Original Post: "Brown Swan Event" [12/19/2011]
Every time the markets have crashed these recent past times ('97, '98, '00, '01, '02, '07,'08...), the self-nominated "experts" at large scratch their heads and say "No one saw that coming".  Therefore, based on the current level of complacency, I highly suspect that will be the case again this time, so we may as well get a jump on things and consider what types of excuses will emanate from the Idiocracy.

It was Nassim Taleb, in "Fooled by Randomness", who introduced the concept of a "Black Swan Event" i.e. a rare and "unpredictable" event that can only be rationalized in hindsight as having been predictable.  According to Taleb, anyone who analyzes these events in hindsight and explains them in simplistic terms, is Monday morning quarterbacking.  If you read the book you soon realize that there is only one person with the true gift of foresight and that is Taleb himself.  Apparently, that is why he wrote the book - to share his uncommon wisdom with us fortunate commoners.  And, what you ask, does Taleb say about those other few individuals who actually predict these events before the fact?   Well of course, those people are either the one in a million who would randomly make up such an event and thereby got lucky on timing OR they are perma-bears constantly predicting economic chaos and hence not requiring any specific timing in order to be deemed right, after the fact.

The End of the World Only Comes Once and You Can't Make Any Money Off of It
No surprise, Taleb's book and attendant Black Swan theory was a huge hit on Wall Street, because it put all of the doomsayers and their gloomy predictions in the dustbin where they belong.  Equally, the theory gave full license to any and all sorts of speculative behaviours that heretofore would have been deemed reckless. After all, the great Taleb said that no one can predict the future and therefore reality and cause/effect had conveniently been suspended.  Statistics and statisticians wouldn't lie, would they ?

Brown Swan Event
As you can tell by my sarcasm, I don't buy an ounce of that "Black Swan" bullshit.  The fact that the term was "coined" by a Ph.D solely for the purposes of selling books and hence minting more "coin" (bad pun), is all we need to know to realize that it's pure academic nonsense.  So, I came up with a term of my own, which I call the "Brown Swan Event".  Simply put, a brown swan event is a highly predictable (inevitable) event that everyone "knows" could happen, but assumes it won't happen in their lifetime.

The analogy of the Brown Swan is of someone bent over with his head in the sand while a white swan flies straight up his ass - it's messy, but that's how brown swans are made...

Below I make my best attempt to predict the top reasons people will once again give for being clueless that the economy/market was vulnerable to yet another crash:

Excuse #1:   I thought the U.S. would be the first country in history to outsource the entire economy and borrow its way to prosperity

Excuse #2: I was watching CNN and Faux News and therefore had no idea what was happening in the real world

Excuse #4: I knew Europe had a debt problem, but Faux News told me that they are lazy socialists and therefore we are immune to their problems

Excuse #5:  I was too busy driving my children across 5 States to a soccer tournament

Excuse #6:  It's only been 3 years since the last crash and my financial planner told me not to worry, because that was a once in a lifetime event

Excuse #7: I trusted the politicians to fix the economy (although I was a bit suspicious when I noticed that they were campaigning non-stop and otherwise couldn't manage their way out of a paper bag)

Excuse # 8:  I figured Wall Street had learned its lesson the last time we bailed them out with all that free money

Excuse #9:  I'm not good with math, like addition and subtraction

Excuse #10: I read Taleb's book and he said that no one can predict when the next crisis will occur, so I just ignored everyone who said it could happen again